The arts are integral to the education of our young people,” said HRH The Duke of Rothesay. “They broaden our horizons and our humanity, and allow people to transcend their boundaries and connect with one another.” He was speaking last summer at the launch of a unique collaboration between Dumfries House and the Royal Conservatoire of Scotland: RCS at DH, an educational and performance-centred community outreach programme that is now under way.

RCS at DH initially focuses on teaching stringed instruments and modern ballet, and offers local schoolchildren free tuition from Conservatoire staff. It also allows the public to enjoy performances by first-class artists in the splendid surroundings of Dumfries House, and affords teacher-training opportunities to Conservatoire students.

Plans began two years ago, when the Glasgow-based Conservatoire welcomed a new Principal, Professor Jeffrey Sharkey; since The Duke of Rothesay is the Conservatoire’s Patron, a royal visit to Dumfries House was a good opportunity for the two to meet. “Our conversation turned to the challenges and opportunities for the arts in Scotland,” says Sharkey, “and the Duke said, ‘Wouldn’t this be a wonderful place to have as one of your outreach centres?’ And I said, ‘Yes!’”

There was a third person present without whom the plan might never have taken shape: Dumfries House’s Deputy Executive Director, Kenneth Dunsmuir, himself a graduate of the Conservatoire, who had been a school Director of Music. “His Royal Highness asked me to join in the conversation because he thought it ironic – given my background – that we were doing nothing for the performing arts as part of the House’s work with the community,” Dunsmuir says. “Jeffrey and I looked at this and we came up with RCS at DH – the idea being to bring art to the people, rather than tell them what was available in Glasgow.” 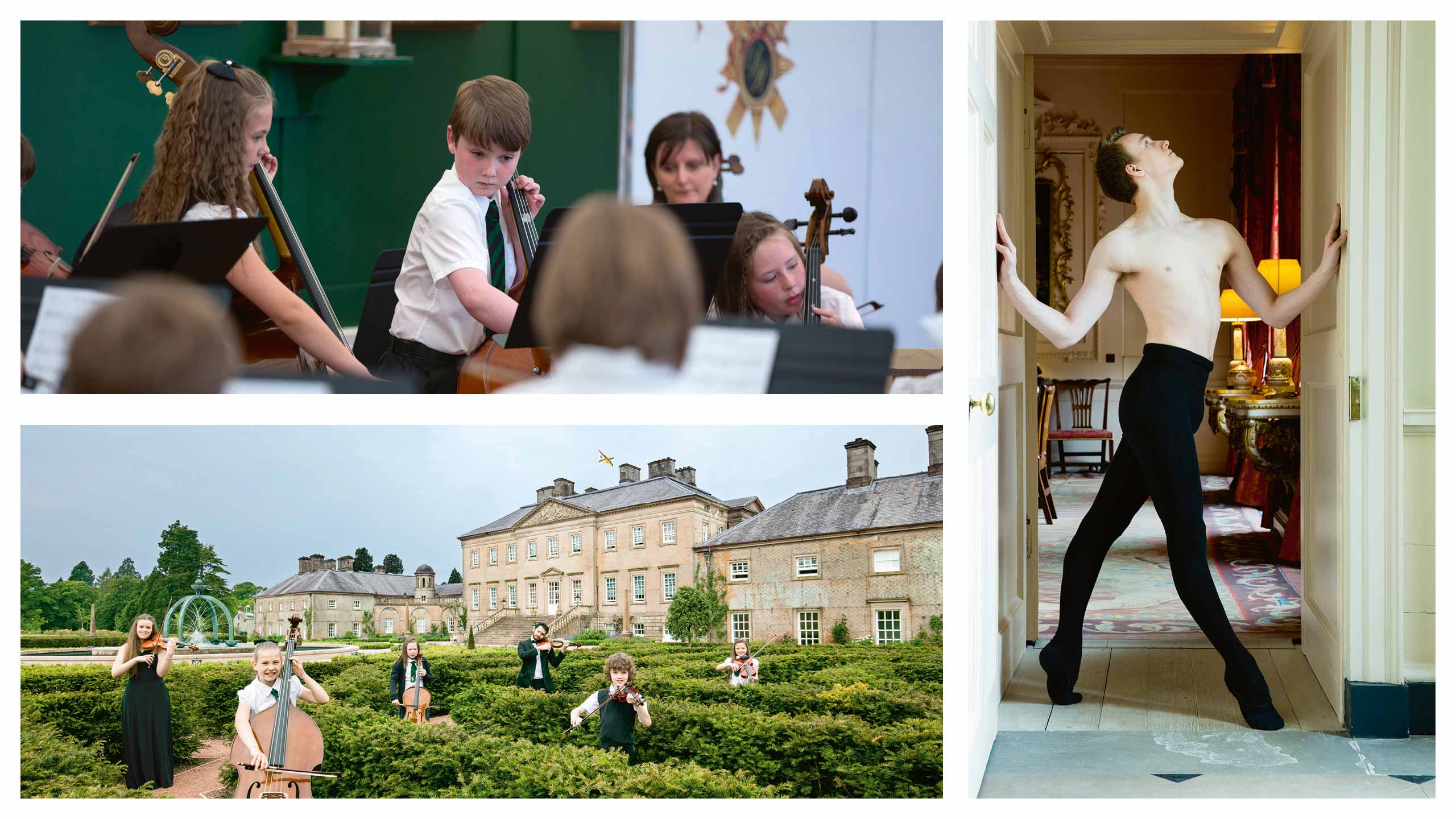 The decision to begin with strings and dance was logical. “With other art forms, you can come to them when you’re older and still excel,” explains Jenn Adams, the head of the RCS’s Junior Conservatoire, “but with these you need to have technical training early on. Greenmill, the local primary school in Cumnock, was already teaching strings for an hour a week, but the children couldn’t take the instruments home, so they weren’t able to practise and there was no provision for continuing at secondary school. So we saw RCS at DH as a chance to bridge the gap.

“We brought some of the children along to the launch with His Royal Highness in June, and they were really excited by that,” continues Dunsmuir. The children watched dance demonstrations and listened to skirling bagpipes and more sedate classical music, from senior students, and saw what they could aspire to. “It was a great moment, and a lot of them decided there and then that they wanted to be part of the programme.”

Before they could join, however, there was a selection process. “It’s not easy,” says Andrew Comrie, the Conservatoire’s Director of Academic Innovation. “Even aged seven, you have to audition. And, of course, we didn’t know whether the talent was out there or not. It’s wonderful to discover that it is.” In September, 14 violinists and cellists, aged 11 to 13, could be heard tuning up in Dumfries House’s Pierburg Building for the first time. They now come every Saturday for two lessons: one in pairs, the other as part of an orchestra.

“The children are really enjoying it,” says Julie Carrie, Ayrshire’s Youth Music Initiative Co-ordinator. “And their parents are delighted. At the moment it’s only Greenmill, but we hope to open it next year to all five schools in the area.”

While RCS at DH builds on Greenmill School’s existing base for music – “A wonderful school with great teachers doing great work,” says Sharkey – the ballet programme started from scratch. “We began in October by doing workshops with seven primary schools in East Ayrshire,” says Megan Peasgood, who was chosen by the Conservatoire to take charge. “We did some simple creative dance and a little ballet technique, though we tried to avoid the word ‘ballet’ to begin with, and selected students we felt had potential. It was impressive; some of the kids were tentative to start with, but they worked together really well. Then in December, we held auditions and took pretty much everyone who came to them.” All 14 recruits were girls. “It’s challenging getting boys on board,” admits Peasgood. “They all want to play football. But we saw one who was great and we’ve left the door open for him.” In January, the dancers, aged eight or nine, began training once a week in Dumfries House’s sports hall. “It’s a wonderful space to work in and they’ve all seized the opportunity,” says Peasgood. “I’m amazed by their energy: an hour-and-a-half is a long time for that age group, but they listen to what’s expected of them and retain it. What’s nice is that they all want to be in the studio, to be learning – they smile all the time.” 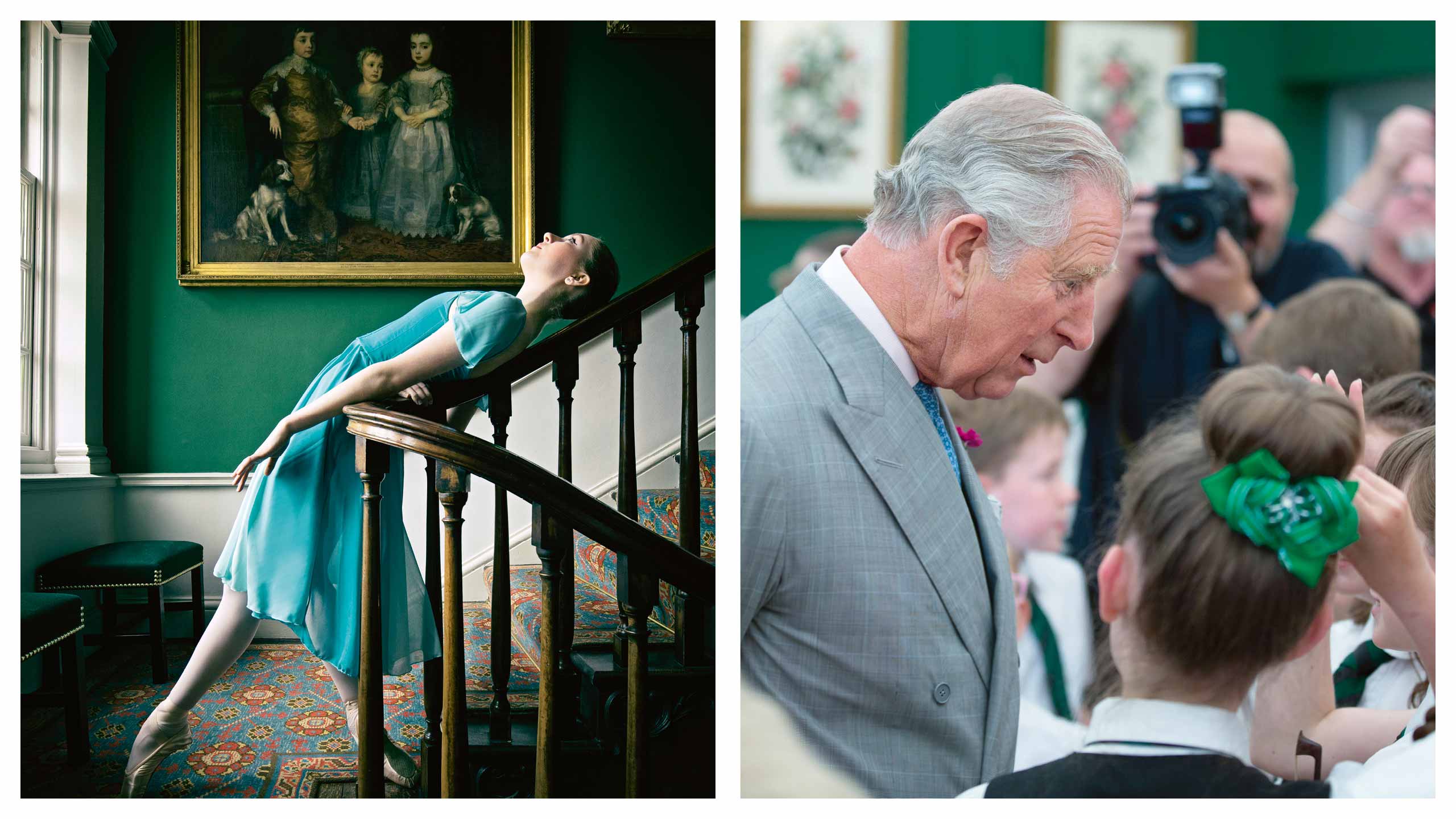 From left: Dancer Bryony Robertson and HRH The Duke of Rothesay talks to local children at a launch

The fact that all this is free is crucial to a deprived area. Besides tuition, dancers are provided with leotards, tights and ballet shoes, and musicians with instruments. Dumfries House also lays on transport to and from lessons. “The pressures on funding of council services has badly affected making music accessible,” says Andrew Comrie. “In Glasgow, parents would pay a couple of thousand pounds a year for this. Part of the Conservatoire’s strategy over the next five years is to create local centres, particularly where there’s social marginalisation. His Royal Highness has been fantastically engaged in the project, and Kenneth Dunsmuir has brought his energy and effervescence to it. And one thing they’ve helped provide is sponsorship.”

But locals are not alone in benefiting from RCS at DH: it also affords the Conservatoire’s students an opportunity to train as teachers. “Most of our graduates go on to teach at some stage,” says Jeffrey Sharkey. “We want them to see that it’s not a lesser thing than performing, it’s equally virtuosic. RCS at DH helps them to improve to teach others: they will be there every week assisting our staff. The Hunter Foundation has generously created scholarships for young people to study with us and join the teaching faculty, too. I’ve also talked to the Principal of the Carnegie Hall Academy in New York about a possible exchange programme.” Students will also perform at the House.

A gala concert at Christmas was enthusiastically received and is likely to become an annual event. And a series of recitals will start in the spring, probably in the Tapestry Room with an audience of 80-100. All this feeds into a strong tradition of music at Dumfries House.

“We used to have something called the Cumnock Music Club, which attracted some of the best musicians in the world,” says Dunsmuir. “At one point it met in the Tapestry Room. My interest in music was hugely stimulated by going along to it.”

The House is also one of the venues for the Cumnock Tryst, a classical-music festival founded three years ago by composer Sir James MacMillan and his wife Lynne. “Sir James is a local like me, and he asked me to join the board,” says Dunsmuir. “The festival has been hugely successful and there’s an obvious synergy with Dumfries House, because we’re both trying to do the same thing – go into a deprived area and try to attract people’s attention and stimulate something.”

How will RCS at DH develop? The aim is to have a new intake of young musicians every year, so that before long 100 pupils could be involved. Other art forms will also be introduced: “We plan to move on to musical theatre and acting,” says Andrew Comrie. “This might involve a community drama project or story-telling about people who lived in the House.” A summer school and a composer-in-residence scheme are also on the cards.

“The ultimate hope”, says Kenneth Dunsmuir, “is that some children from this area will make their way into the Conservatoire to study in some shape or form. We’re looking at giving them an opportunity, but then saying, ‘It’s your decision’.”