Textile conservators Julie Travis and Lynsay Shephard are a well-practised double act: an exchange of facial expressions seems to communicate a thousand words, and they often make each other laugh. But then Julie, expert in historic costumes and furnishings, and Lynsay, a tapestry specialist, have worked together for more than 30 years. Before setting up their company, Shephard Travis, they were at Hampton Court Palace looking after the royal collections. They have worked for an impressive list of institutions and historic houses, such as Buckingham Palace, Windsor Castle, Blenheim Palace, Bath Fashion Museum and the V&A. 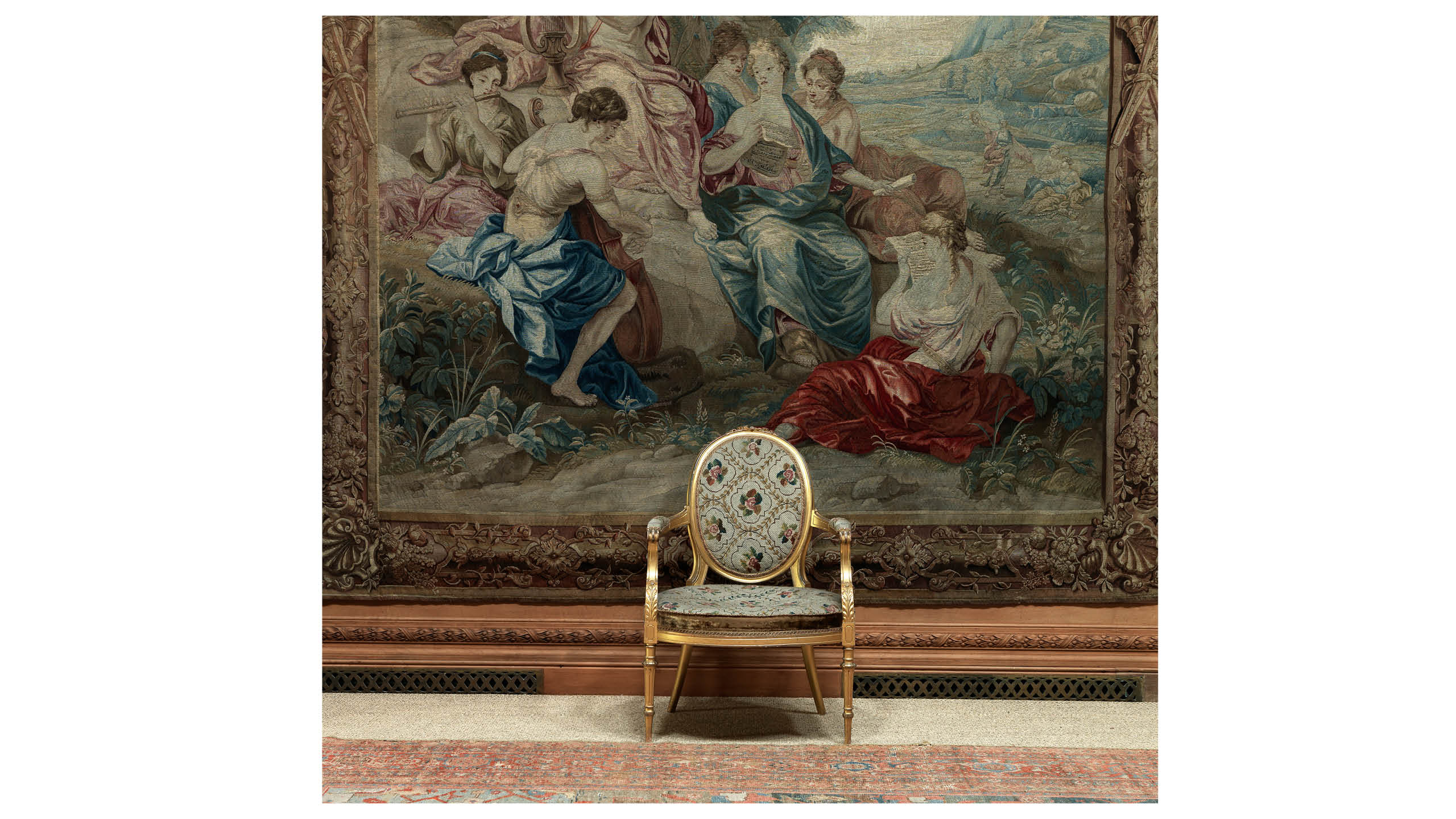 So it was no surprise when Shephard Travis was asked to work on the conservation of Dumfries House’s tapestries: four early 18th-century artworks, woven in wool and silk, that sit in ornately carved frames within the Tapestry Room. They depict the Greco-Roman gods Apollo, Diana, Minerva and Bacchus, and for years were believed to be by the Parisian firm Gobelins. In fact, they were made in the Leyniers-Reydams workshop in Brussels. “They’re lovely,” says Julie. “Once you start working on them, you realise the incredible skill and detail of the design.”

The work, undertaken at their Surrey studio, was challenging. The first step was to remove the lining and assess the state of each piece from the back. “They looked fairly sound, but as soon as the linings came off, we realised they had been heavily treated, probably 80-100 years ago,” recalls Julie. “They’d had different types of work carried out at different stages,” agrees Lynsay. “There were crude rewoven repairs, which were unsightly and distorting; they’d had patches of net stuck onto them, which had also been worked on. It’s always a consideration as to how much of that should be taken out, because repairs can become part of the history of the object.”

“The aim of the conservation was to strengthen the tapestries, so they could continue to be on display at the air-conditioning-free Dumfries House”

Shephard Travis are conservators not restorers: their goal was to strengthen the tapestries, so they could continue to be on display at Dumfries House, which is a building free of air conditioning. “Textiles are good buffers for the environment, so they’ll either absorb moisture or give it out if it’s dry,” explains Julie. “With an old building, you can’t completely control the environment within the rooms.” These factors, plus long-term exposure to UV light, can degrade fabric.

The team took samples of threads and tested them to see which dyes might run when washed. They made detailed, scale drawings of each tapestry to map out its weak points, and each piece was then carefully bathed and left to dry for several days. Once cleaned, a large piece of linen was put onto the back of each, stitched at intervals throughout the tapestry to help bear its weight when hung. Stitchwork was then used in places to fill in the woven image or strengthen weaker patches. Finally, the tapestries were lined to protect them from the wall surface, and hanging mechanisms were added – in a surprisingly modern material. “These days, it’s usually Velcro,” reveals Lynsay.

The work has made the tapestries, now back in their rightful place, more robust. “Invariably, lighter colours are woven with silk, while darker colours might be woven in wool. So on a landscape, the silk at the top is taking the weight of the wool areas at the bottom,” explains Lynsay. “A big tapestry can look quite sound from ground level, but if you were to get a ladder and have a look at the top, it’s being pulled to pieces.” Shephard Travis’s interventions have added some much-needed support.

Both Julie and Lynsay say that working with the tapestries – which would have been woven blind, from the back – gave them huge admiration for the original weavers. One suspects, though, that the pair’s work is equally skilled. With a busy studio, they have little time for their own creations; Julie says she recently made a needlework times table with her daughter but, she laughs, “I kept getting the sums wrong.”