No room at Dumfries House elicits sharper intakes of breath from touring visitors than the Pink Dining Room – the 5th Earl’s showpiece to impress guests and callers, and nudge his social standing up a few notches.

The rosy hue that gives the room its name wasn’t applied to its walls until 1955, by the widow of the 5th Marquess of Bute, then Dowager Marchioness, Lady Eileen Bute. But documentation proving provenance tells us the artefacts and stylistic flourishes that now characterise the Pink Dining Room are those originally chosen by the 5th Earl in the 1700s. “While he’d be confused by the electric lamps if he visited today, the Earl would otherwise recognise this as his dining room,” explains Collections Manager Thomas Breckney. “His portrait, the Italian masterpiece, the carpet, the dining table and 22 chairs by Scottish cabinetmaker Alexander Peter, the mirrors – all of these are original, so it’s a good approximation of how it would have looked and felt during his lifetime.”

Many Dumfries House staff count it as their favourite room, not to mention HRH The Duke of Rothesay himself, and the chamber feels as alive now as it would have done when it was first completed. Says Breckney: “Dining rooms were the hub of social life in the 18th century, so right from the start, it was more elaborately decorated than any other room in the house.” 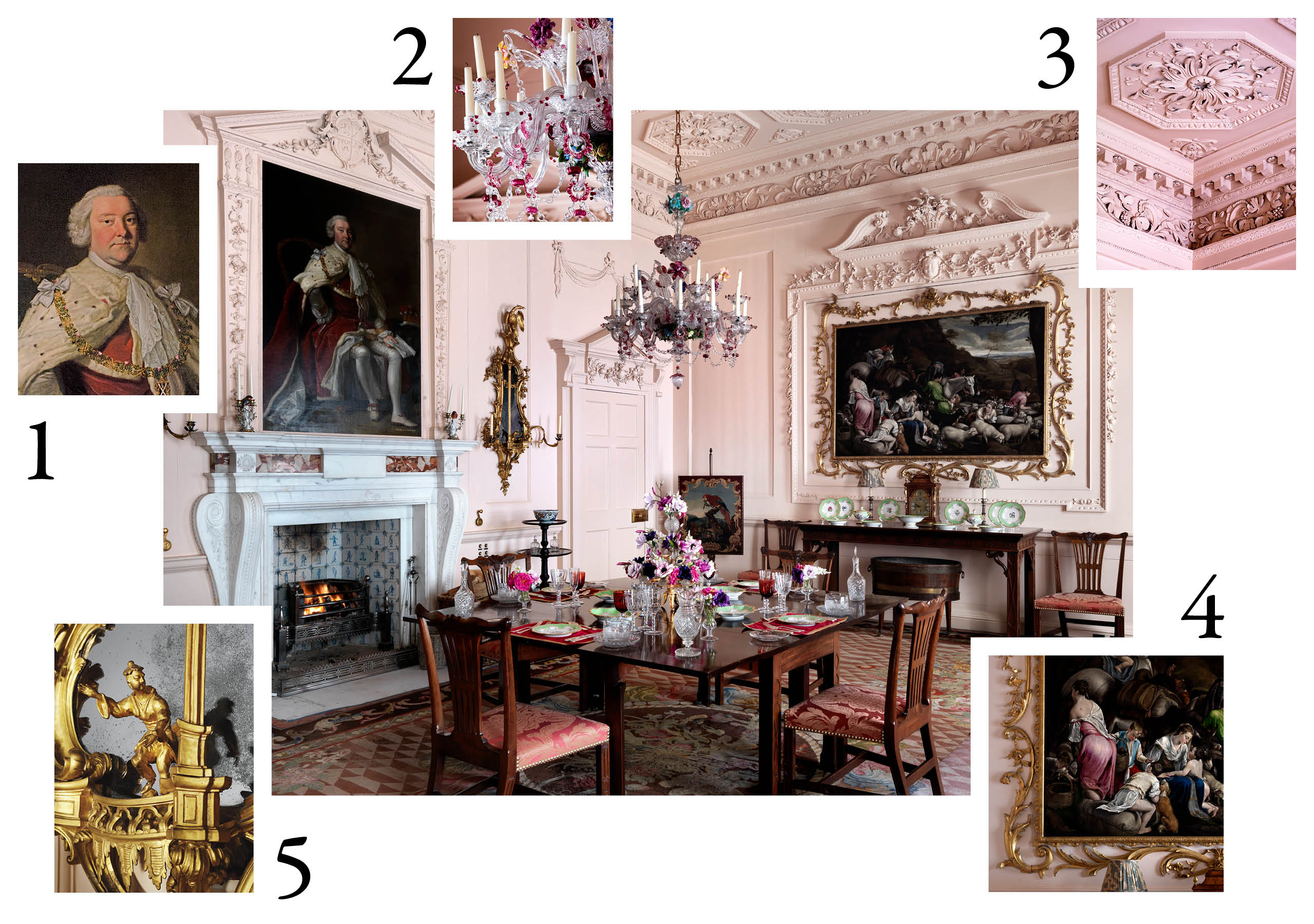 No attempt to attract a bride was complete without a portrait, so Thomas Hudson of London was commissioned to paint this one, which has been hanging here since 1759. The document in his hand is the contract signed by the Adams brothers when they were commissioned to build the House.

The room’s 35kg chandelier was found in the basement in more than 100 pieces in 2007. It dates from 1760 and is made from Murano Glass. Remarkably, when it was sent off to be reassembled, every last piece was there.

The intricate Rococo plasterwork, painted pink in 1955 and inspired by the ruins of Palmyra in Syria, is the main reason why this is HRH The Duke of Rothesay’s favourite room in the house.

4. Italians do it better

An Italian masterpiece was a staple possession for an 18th-century man out to impress. This one, Jacob’s Journey by Jacopo Bassano, was already 200 years old when the Earl bought it in London.

This gilt piece, which features twirling candlesticks and is topped by long-billed ho-ho birds, is one of two breathtaking Chippendale mirrors in the room. The London artisan’s work was supplemented by three Edinburgh furniture makers: William Mathie, Alexander Peter and Francis Brodie.

You can also read more about the Pink Dining Room here