Blunter observers have described Dumfries House as a ‘honey-trap’, in reference to the role the 5th Earl wished it to play in his mission to attract a bride. And the Blue Drawing Room – a resplendent parlour filled with damask-silk-covered Chippendale elbow chairs, fine art portraits and intricately moulded plasterwork – was the focal point of his amorous endeavours.

“There are lots of romantic overtures and imagery, such as the flowers on the carpet and lovebirds on the ceiling, so it definitely would have fitted into his broader idea of making the house attractive to a bride,” says Head Guide Alex MacDonald, who adds that the Earl would very much recognise the room as it is today. “It’s very close now to how it was,” he says. “The carpet, chairs and sofas are all the originals, as are the mirrors.”

Curator Emeritus Charlotte Rostek agrees. “It’s the first room the 5th Earl created – there’s a shipment document dated May 1759 – and there are surviving letters in which he describes his plans to go to London and get the two sofas that are either side of the fireplace, for example, and to pick up one of the Chippendale elbow chairs as a prototype.”

Rostek says that here is ‘where it all started’ in another sense, too. When the first phase of the great restoration project began in 2010, this was the first room the Trust tackled and it was generously funded by Mr and Mrs Timur Kuanyshev. 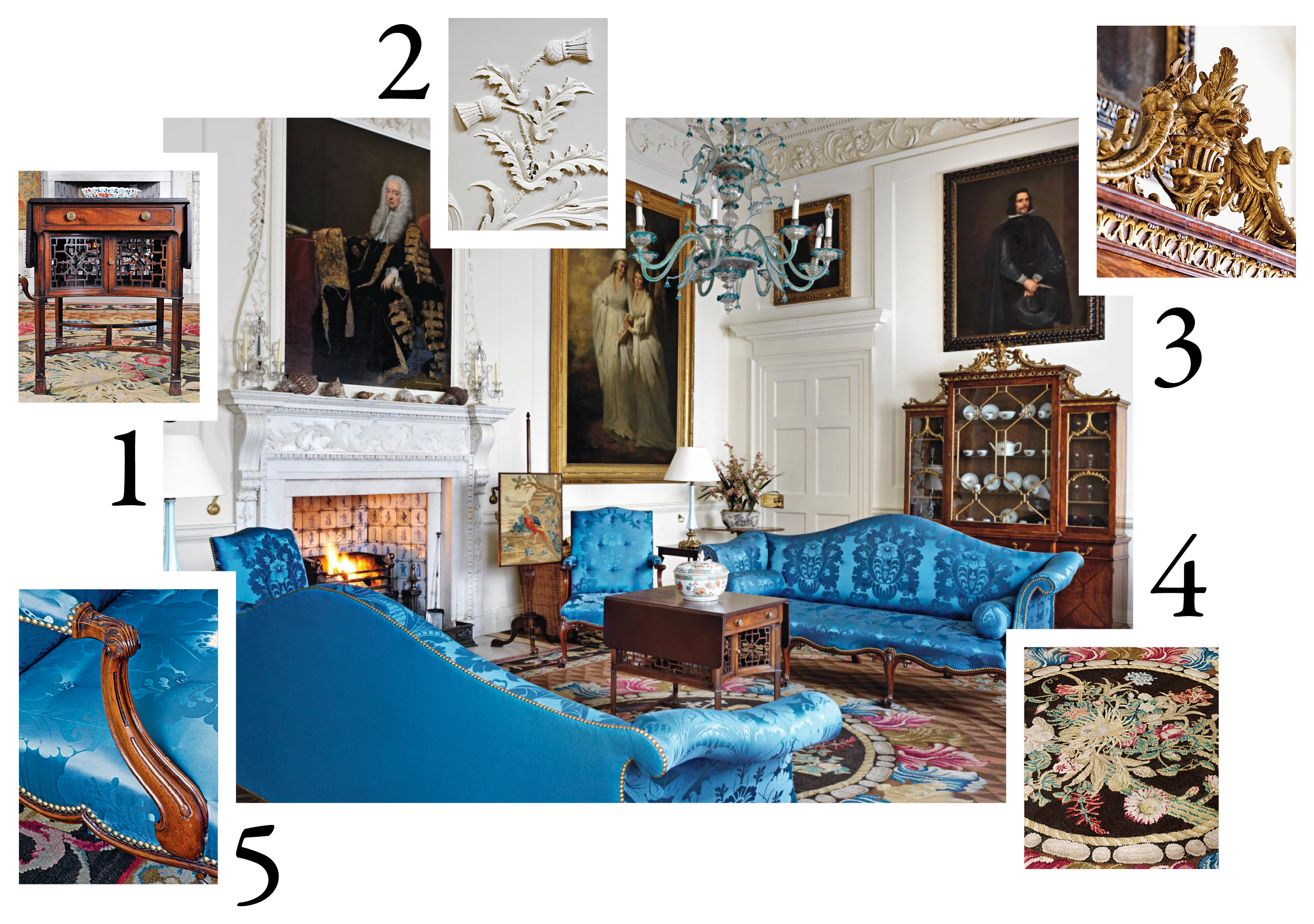 This breakfast or supper table,the first piece the Earl bought for the house in 1756 for £3.30, is by London-based Scot Samuel Smith, who had hoped to end up furnishing the whole house

One of eight, two-headed thistles incorporated into the ceiling, all nodding elegantly to the fact that the owner of the house was a Knight of the Order of The Thistle

“The flower bouquet is slightly asymmetrical and draws on plant motifs: the C scroll and S scroll help to make up a typical Rococo flourish,” says Charlotte Rostek of the elaborate gilded limewood crest atop the room’s bookcase. “It’s a superb piece of craftsmanship.”

The Axminster carpet, made by Thomas Whitty, features exotic flora, including a flowering cactus and a tobacco plant. The carpet’s central medallion is echoed in the central feature of the ceiling above – a trick that architect Robert Adam would perfect in later interiors

‘Sensual’ is one of the words that has been used to describe the way this arm terminal, protruding from the upholstered part of a Chippendale elbow chair, scrolls elegantly downwards/p>

The phrase ‘drawing room’ comes from the word ‘withdrawing’, as in where people withdrew to after dinner. The ladies would withdraw here, while the gentlemen remained around the dinner table, drinking, smoking, and discussing business and politics.