Even in the grandest of houses, some people can't resist running a finger along surfaces for dust. "I do, because members of the public will as well," says Mary Bell, Dumfries House's Head of Housekeeping. "People look behind things and check under things - you'd be amazed. They're always desperate to catch you out."

They seldom succeed. Cleanliness, Bell believes, is one thing that sets Dumfries House apart from the majority of stately homes: "Some are stunning, but many don't have the money to employ enough people, so they often have to accept spiders' webs and so on." Dumfries House boasts a housekeeping team of 12, but with most of them working part-time, keeping everything spick and span requires a canny deployment of forces. "We have so many different buildings on the Estate and you want to make sure that the standard is the same throughout," Bell explains. "The Education and Events departments tell me what's going on, and I work out a detailed rota so everyone knows what time a group's leaving and when they can go in."

Occasionally, members of the team have found themselves really up against it: “At the opening of the Lodge, we were cleaning doorsteps and finishing up as the first arrivals walked through the door. But you just roll up your sleeves and get on with it.”

Few people know more about hygiene than Bell: before moving to Ayrshire, she worked as a cardiac theatre sister at Yorkhill Hospital in Glasgow. It was through her husband that she became aware of Dumfries House: “He’s a surveyor, and when the House came on the market in 2007 he spent three days going over it and the Estate. About a year later, there was a wee advertisement in the paper for guides, and I thought, ‘I could do that.’” She went on to become an events co-ordinator, “Then, because the Estate was getting bigger and the housekeepers were a bit rudderless, I was asked to corral them all and organise them,” she adds.

“Mary’s probably the best boss I’ve ever had,” says Audrey Bone, a key member of the team. “She’s certainly a formidable woman, but she’s so fair. She’ll get stuck into anything and never asks you to do anything she wouldn’t do herself.”

Looking after the House involves everything from basic bathroom scouring to the specialised care of precious antiques. “In a lot of cases, it’s common sense,” says Bell. “You just have to go at it carefully. The Eglington table in the Great Steward’s Dining Room is a good example: we never use furniture polish on any of the wood in the House, because it just leaves a film that gradually builds up and attracts dirt. The secret is elbow grease – you buff and buff and it comes up a treat.”

The House’s two specialist cleaners, Anne Caldwell and Lesley Samson, have worked there since it first opened. “Two conservation cleaners came from Sweden and they passed on their knowledge to us,” says Anne. “For example, you should always vacuum with the grain of the carpet, not against it, and for tables with metalwork you should use a brush. The hardest thing to clean is probably the gilding, especially when it’s high up: the Pier Glass mirrors have to be done very gently and can take an hour. The most satisfying is the metalwork on the fires, because you can get a good shine on that. We use Autosol car-chrome cleaner, with a layer of Renaissance wax to keep out the dampness and stop rust.”

Their armoury ranges from backpack vacuum cleaners (handy when you’re working up a ladder) to cotton buds for getting into nooks and crannies. Squirrel-hair and badger-hair brushes are used for delicate furniture, while ceramics are cleaned with a very soft, slightly damp cloth: “You can’t just dip them in soapy water, because if they’ve been repaired the glue will dissolve,” explains Anne. And for spiders’ webs? “We have a lovely extendable ostrich-feather duster,” says Lesley. “Spiders get everywhere – we have to check between the struts of the stairs every day.” Occasionally, outside expertise is required. “We’ve got some fabulous new paintings and we need to know how much to do with them,” says Bell. “Rufus Bird, who’s a Trustee and Deputy Surveyor of the Queen’s Works of Art, knows how everything should be looked after and we’ll take our lead from him. At the moment, there’s a lovely collection of silver from The Royal Collection on display, and staff from Buckingham Palace came up to give us training on that.” 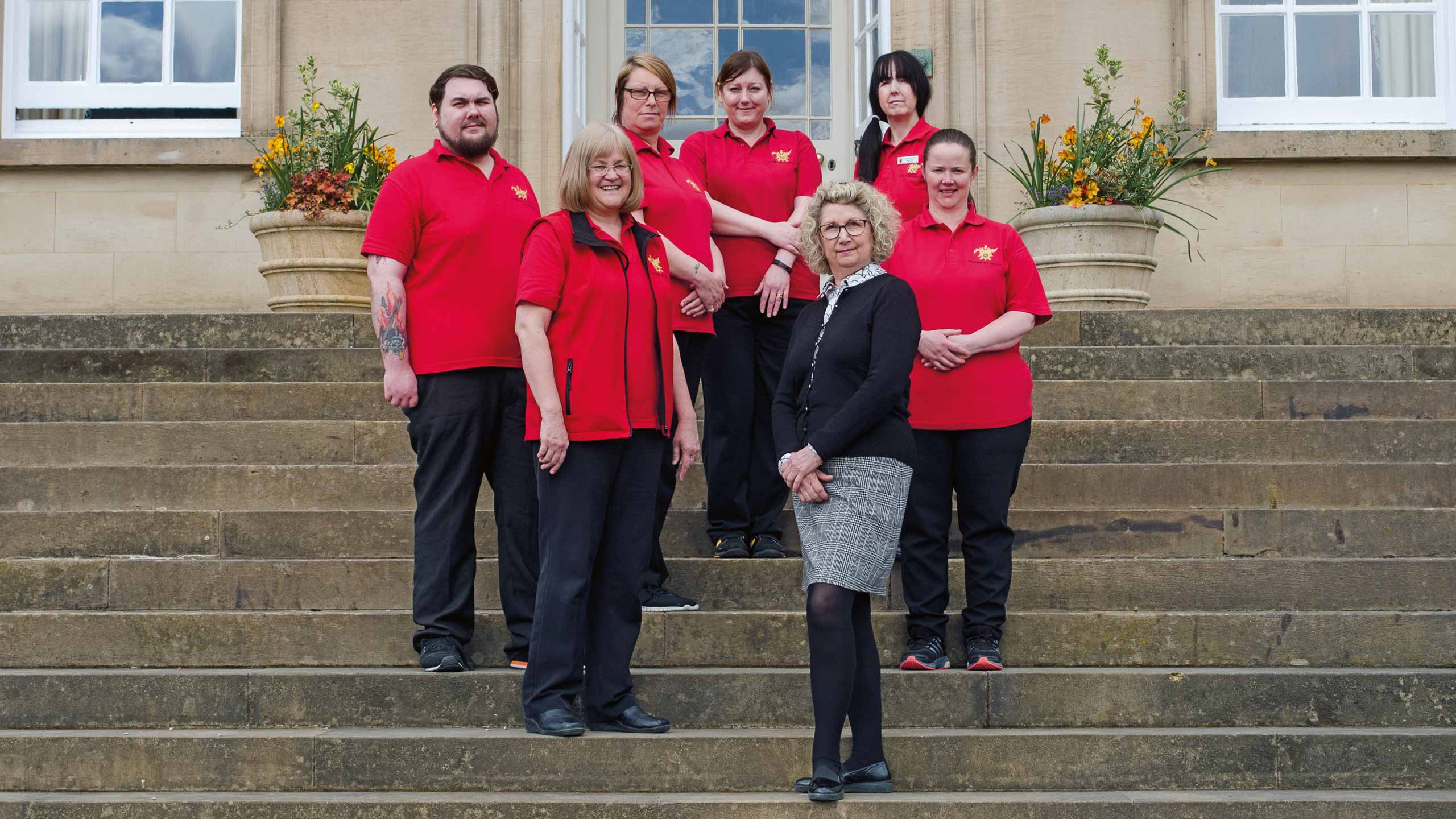 But above all, Mary depends on the enthusiasm of her team. “I absolutely love it here,” says Housekeeper Silvia Wilson. “As soon as you drive around the corner and see the building you think, “Oh my goodness, this is my work!” Lesley Samson agrees: “I was a pre-school teacher before and I found it very stressful. Starting at Dumfries House totally lifted my mood and everything got better.”

“I’m incredibly lucky with the people I have here,” says Bell. “In terms of age, they go from 21 to over 60, and that makes it special. The young ones are very good: I’ve got Christopher who’s at university in Stirling and comes down every weekend, and I don’t know what I’d do without him; and there are two other students who work throughout the summer. They all have their strengths and they make a very good team.” There are some things about Dumfries House, though, that no amount of training can prepare you for – as Audrey Bone has discovered. “Sometimes you get strange feelings: you go into a room and you come out of it quick,” she says. “I was at the top of the stairs in the West Wing a few weeks ago, with another housekeeper walking in front of me, and it was as if someone spoke to me. I looked round and there was a lady in a cream-coloured crinoline with her hair in a bun who floated round the corner in a split second. It might sound stupid, but it was clear as I’m talking to you now. But they’re friendly spirits – I just had a cup of tea and then I felt all right again.”