There is a new sense of purpose in the not-so-new town of New Cumnock, which is best expressed by the hive of building activity that has surrounded Scotland’s sole freshwater outdoor pool in the heart of the small Ayrshire community.

Built in 1966, it had an expected lifespan of 25 years, but thanks to the love and dedication of its users, the pool has long exceeded that forecast. Devotion alone can’t withhold the elements indefinitely, however, and until recently the pool was in urgent need of some bricks and mortar TLC. The unveiling this June of a major upgrade into what has become Britain’s swankiest outdoor pool has delivered this and more.

Boasting a state-of-the-art air source heating system, underwater lighting and stylish surround buildings, this is set to raise the town’s profile, increase visitor numbers and provide an excellent community facility. Like the newly regenerated Victorian Town Hall across the road, the pool was saved from demolition by the gritty determination of a community-run group, in this instance Afton Water Leisure – plus the intervention of The Dumfries House Trust.

Recent decades have been hard for many mining towns, and here is no exception. With roots going back to the 17th century, New Cumnock grew to keep pace with the demand for ever-more coal, a booming industry through the long decades of Britain’s industrial rise. When the pits went, so did much of the lifeblood of the place as families left in search of employment. With a population of more than 9,000 during peak production in the 1980s, it has now fallen to under 3,000. This loss of industry has brought to the fore the question of how such communities can regenerate.

One part of the mix is heritage-led regeneration, as envisioned by HRH The Duke of Rothesay. All too often, the concept of development and preservation have not gone hand in hand. Here, the town’s cultural legacies are being appreciated and incorporated into plans for the future, retaining local features and character. As with the averted demolition of the Town Hall, the proposed filling in of the outdoor pool would have been a great loss to the area. As well as attracting more than 10,000 visitors to the town last summer, and the obvious economic benefits that brings, the pool plays a key part in the summer social life of the community. 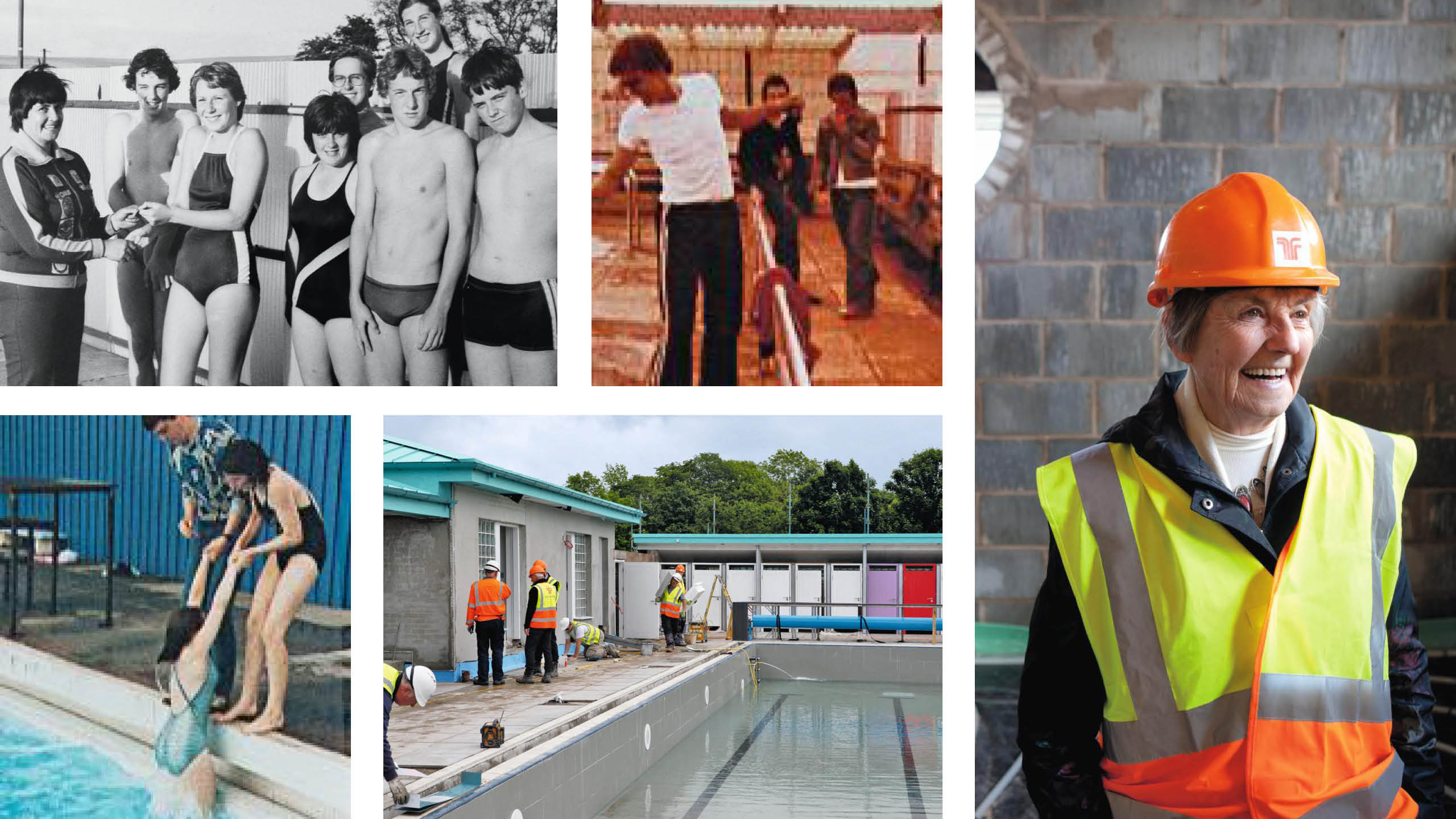 Clockwise: Lifeguard lessons in the 1980s; having fun pool-side; Gette Fulton enjoys the pool’s progress; work under way; memories of competitions and proud winners from the 1970s

Georgette Fulton, OBE, a formidable Scotswoman known to the locals as Gette, has been a central figure in the story of the pool and is owed much credit for its regeneration: her 50-year association, first as a learner swimmer and later as an instructor, grew into her becoming Company Secretary at Afton Water Leisure. The company was set up in 2012, after the New Cumnock Environmental Volunteer group, itself an effort by locals to keep the facility open when East Ayrshire Council withdrew in the late nineties, could no longer fund the project. The affection she has for the place, and her affiliation with it, is made abundantly clear by Dumfries House’s Estate Manager Gordon Neil, as he conducts the site visit: “We’re building a new pool for Gette,” he beams. Indeed they are, and it was a chance meeting she had with HRH that kick-started the current project.

“When Dumfries House took on the Town Hall, the committee was invited to meet Prince Charles,” she explains. “I was introduced as ‘the lady who runs the swimming pool’ and we had a wee chat. He asked, ‘Why don’t you put a roof on it?’ I looked at him and said, ‘Oh no, sir, if you’ve ever swum outdoors you’d never consider swimming indoors.’ I’ve since discovered he often swims outdoors.” Clearly something struck a chord, because he returned later in the day. “He came back and asked me what was needed. I told him changing rooms,” she says. “‘What type of changing rooms do you need?’ he asked and I said, ‘Ladies, gents and disabled’. Within a week there were workmen here having a look around.” Well, as they say: if you don’t ask, you don’t get.

This is a labour of love that has given pleasure to both her and, from the numerous photo albums she has of laughing faces from the 1970s until today, innumerable others too. Her face visibly lights up as she recalls memories accrued over the decades. “I’m most proud when I get the people in these photographs coming up to me and saying, ‘Do you remember the time we did this or that?’,” she says. “The memories we’ve created with these people are priceless. I really hope younger people get the sense of community, fun and friendships from the new pool that I benefited from. I now see people I knew as youngsters coming with their grandchildren."

It was always the Duke of Rothesay’s ambition that the principles of community and regeneration behind his involvement with Dumfries House would reach beyond the Estate walls to the surrounding areas. With the Town Hall and swimming pool being the first of such works, it is safe to say these two highly accomplished, distinctive and complementary projects have made a bold and successful commitment to that vision. The latter was made possible by the generosity of Bob and Tamar Manoukian, with financial support by former local boy Sir Tom Hunter.

“We are thrilled to have had the opportunity, in this the Trust’s 10th year, to be the main donor for New Cumnock Swimming Pool,” says Manoukian. “This really is heritage-led regeneration in a part of the world that has had to face and overcome uch difficulties. Tamar and I were very impressed by the local community, who have over the past few years battled to keep it open. It seemed only right to give a helping hand and get the refurbishment done.”

The renamed Tamar Manoukian New Cumnock Swimming Pool will frame one side of a new square currently being built, which will become a central hub and social space to the town that locals identified as lacking. Around this will be added a children’s play area, a community garden and café, and an arts and crafts centre. There will also be a heritage centre, so that visitors can explore the area’s history of deep and open cast mining, as well as its associations with the ‘Bard of Ayrshire’ Robert Burns plus William Wallace, Robert the Bruce and The Covenanters – something to delight history buffs. 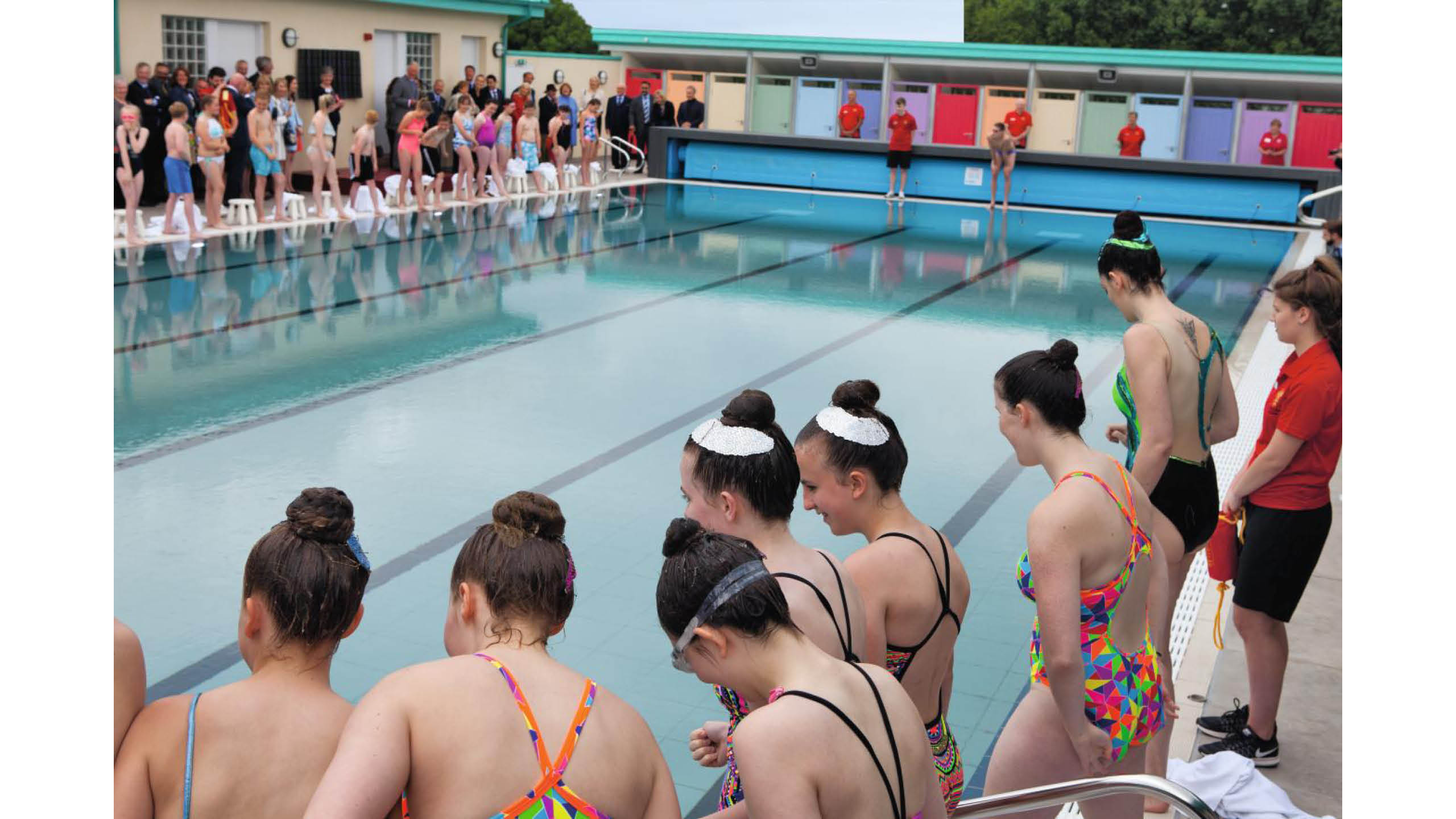 Working with contractors Taylor & Fraser and long-time Dumfries House collaborator Keith Ross of Dovecot Architecture, the transformation of the site is already extensive, although as Gordon Neil explains, there has been the odd curveball during construction. “On demolishing the existing buildings, it was discovered they had no foundations,” he explains. “In effect, it became a complete demolish and rebuild, and a much bigger job than originally planned.”

As was the case throughout the Dumfries House restoration, the work is being carried out to the highest specification using traditional techniques. Porcelanosa supplied the tiles from Spain and the limestone used for one of the main entrances was material recycled from the Estate. All doors and windows are bespoke and made by the Estate joinery, and the roof, made of antique copper, will provide a striking green covering once the Ayrshire elements do their work.

From his office, Site Manager Philip Munroe describes the eco-friendly system being installed for water filtration. “The filter tanks are from Spain. They purify the water through sand, a low-maintenance method that lasts 15 years before it needs to be cleaned.” The water level will now be flush with the floor, spilling into a channel for filtering, and the design is a more stylish one than before.

So what can we expect from the newly opened pool? “We have mother and baby classes; last year we called it babies and bumps,” Fulton says. “We also have life-saving, scuba-diving, adult training, training nights for more active young people, ladies’ nights and an adult night.” In other words, something for everyone. And with a grant from the People’s Health Trust, there will be a new hoist for users with limited mobility. Another benefit of the improved facilities is that the pool will be operational for more of the year than previously, opening for the Easter holidays and running through to October. “With the longer opening times and new facilities, imagine how many visitors we’re going to get this year.”

There is also the hope of an aquatic element to December festivities this year. “I would love to have it open for a week at Christmas and New Year,” she says with a smile. “I think that would be lovely: imagine popping out for a swim on Christmas Day.” With underground heating in the changing rooms and a more user-friendly layout, there will be no 200-yard dash from pool to changing room either. When asked how long she expects the revamped pool to last, she laughs: “It’s going to last for another 30-40 years – long after I’m gone!”