Nowhere has the phenomenal rise of literary festivals been more pronounced than in the UK. With more than 400 taking place every year, successful authors can spend as much time on the road as they do at their desks. But there is only one gathering devoted exclusively to biography and memoir: the Boswell Book Festival at Dumfries House. This spring it attracted nearly 6,000 people who came to hear speakers ranging from Nigel Havers to Bella Bathurst to Richard Ingrams; almost every event was sold out. Taking place over three days in May, it is the busiest weekend of the House’s year. “Dumfries House is a fantastic magnet for families, and what it’s doing is staggering,” says the festival’s director, Caroline Knox. “We’re so grateful to have been welcomed in. It gave us an opportunity to grow, and authors absolutely love it.”

The festival started life seven years ago and five miles away, at James Boswell’s family home, Auchinleck House. “Although Ayrshire had library festivals, it didn’t have a book festival that drew people from all over Scotland and beyond,” explains Knox. “It seemed to me that there was a big gap between the one in Wigtown and Aye Write! in Glasgow. We also wanted to increase awareness of Boswell as a great Ayrshire writer and assist the regeneration of Auchinleck by bringing money into the area – and we thought a festival with a special theme would help.”

The first year’s programme featured just 12 speakers, but the festival expanded so quickly that it soon needed a new venue. It moved to Dumfries House in 2014 and continues to grow: this year, talks took place in the Great Steward’s Dining Room and a new Boswell Marquee, in addition to the main marquee and the Tapestry Room.

Knox admits that persuading speakers, often London-based, to make the trip to Ayrshire has been a challenge. Fortunately, those who have come are hugely enthusiastic about it and have helped to spread the word.

“It was a real treat to speak at the festival,” says Alexandra Shulman, the former editor of British Vogue, who was interviewed at the festival by journalist Kirsty Wark about her book, Inside Vogue. “As a location, Dumfries House is exceptional: I loved being in such beautiful surroundings and being able to listen to such an interesting and varied roster of speakers,” she adds. 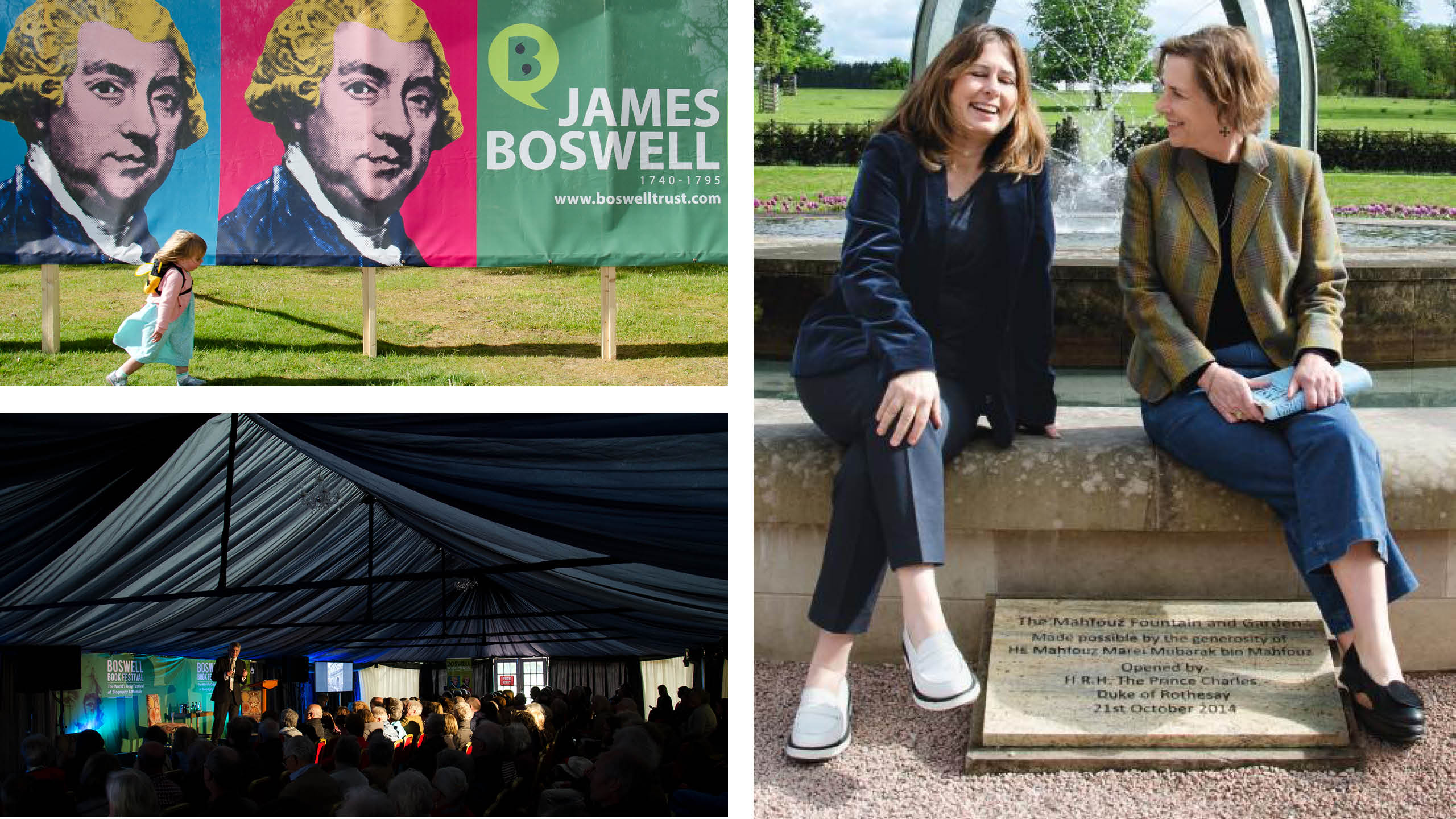 Historian Simon Sebag Montefiore agrees: “I’m a veteran of many literary festivals, from Australia to California, and this is one of the most charming. It’s such an honour and a delight to celebrate the great James Boswell and to finally see Dumfries House in all its glory. It’s amazing what a creative concept this is, with so many projects. Then there is the accommodation at the Lodge, which is described as a B&B but is definitely the most sumptuous I’ve ever seen. It’s beautifully organised: the audiences are enthusiastic and sophisticated, the other speakers are stellar and it’s simply a pleasure to take part.”

Knox’s husband James, chairman of the Boswell Trust and a prime mover in the saving of Dumfries House, agrees that the audiences have a special quality. “There’s an incredible warmth to them and a sense of anticipation. It’s not like down south, where every village has a book festival. We had Jung Chang here two years ago and people were totally enthralled and moved that she’d made the journey.”

Authors, he adds, love being treated as guests in such a splendid house and having a chance to discuss their craft over lunch in the Library and dinner in the Great Steward’s Dining Room, as well as being taken on expeditions to local sights such as James Boswell’s Auchinleck House and his mausoleum in Auchinleck churchyard.

The festival isn’t only for adults: there are also two days of children’s events at the Morphy Richards Engineering Centre, overseen by its head, Dr Karen Alexander, and generously supported by East Ayrshire Council. This year’s theme was Keeping The Planet Happy, and 440 pupils from 18 schools gathered to hear Jason Lewis talk about travelling around the world by human power using a bicycle, pedal boats and inline skates. They also had a tour of Dumfries House and took part in a diary-writing workshop.

In addition, writer Vivian French and illustrator Harriet Burbeck worked with two local schools to produce decorated panels inspired by Laura Ingalls Wilder’s Little House on the Prairie. Not to mention drawing, mask-making, bug-hunting – oh, and a lady with a python. Now that would have been something for James Boswell to write about in his diary.

The Boswell Trust, which stages the Festival, would like to thank Dumfries House, East Ayrshire Council and Creative Scotland, and the other donors, for their generous support. The next Boswell Book Festival will be on 11-13 May 2018.