If you stand in the middle of James Hardie’s workshop, it’s difficult to know where to look. Glance overhead and you’ll see rows of chairs dangling from the ceiling like ageing hams; look at the workbench and you’ll find piles of spare wood and tools jostling for space with half-drunk cups of coffee. As your gaze falls to the floor, a Georgian mirror and ornate clock face vie for attention, but it is a delicately curved £250,000 Ming dynasty chair that proudly commands the room’s focus. The vista is a chaotic feast for the eyes, but as Hardie details the provenance of every antique and the purpose of each piece of wood, there is no doubt this restorer is a master of his craft.

James’s royal connection spans years; his talents have been utilised by Buckingham Palace and for the Royal Collection. The decades of expert skill gained from working with his father has led to him being employed to carry out the extensive restoration of the rooms and antiques at Dumfries House.

“I started out studying architecture at university,” says Hardie of his route into furniture restoration. “And although I enjoyed it, I couldn’t see myself doing it for the next 40 years. Luckily, my father was a restorer so I was able to go and work with him at his firm, J&J Hardie Antiques. Not that he wanted me – he gave me three months to prove myself.” Thankfully, he did just that and spent 20 years working for his father on projects like the Palace of Holyrood House in the 1990s. 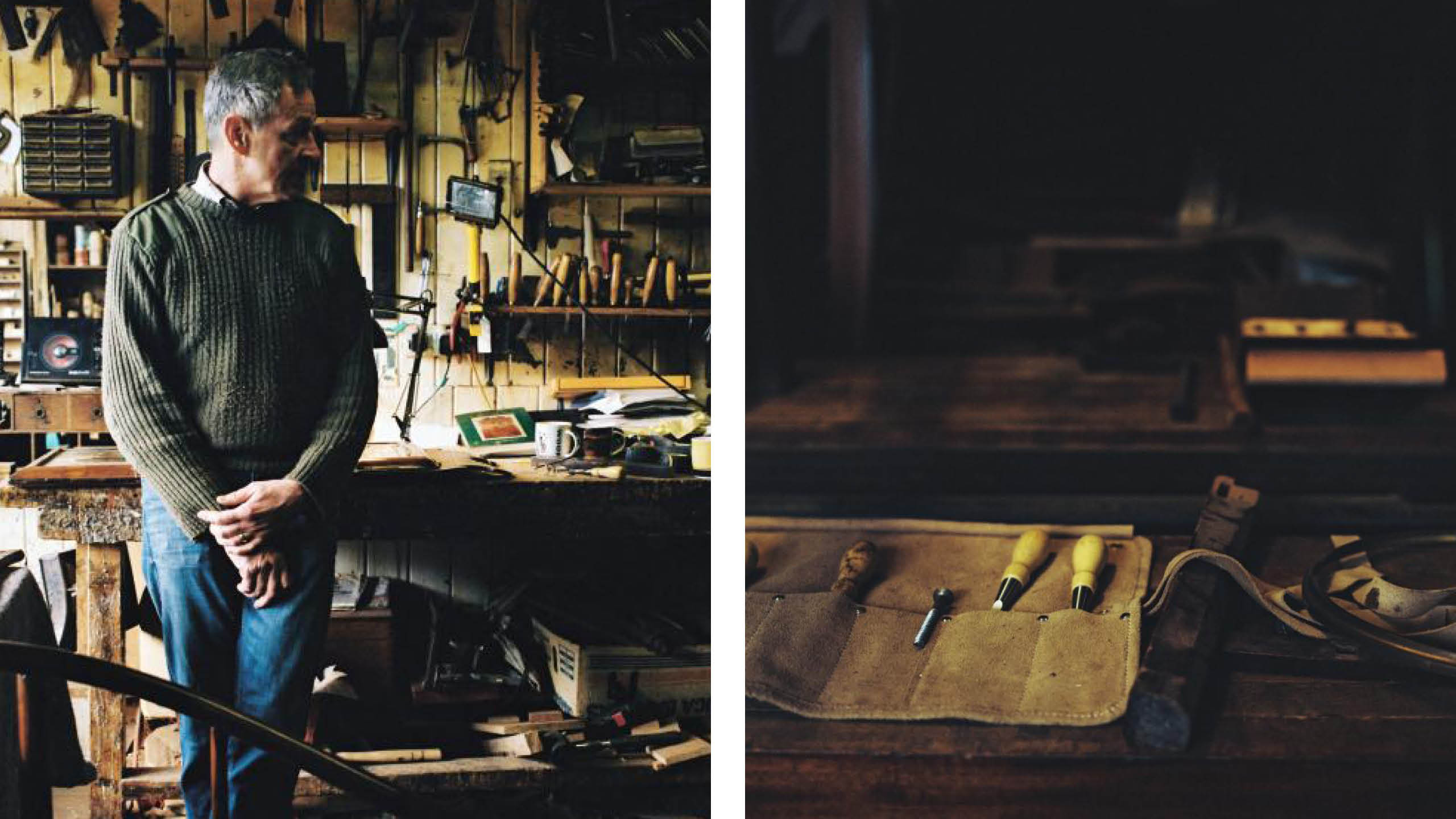 From left to right: tools of the trade; a quiet moment in Hardie’s studio

James has worked on a range of antiques in his workshop, which was formerly a grocer’s shop. “We bought the shop around 30 years ago: the previous owner had just walked out and left it fully stocked. There were joints of meat, yoghurts and all sorts,” he recalls. “I fitted hooks for the chairs, but all the shelves and the walls are the original Victorian ones.”

James has gained work from word of mouth and reputation alone, and built up an illustrious client list, so he was a natural choice for Dumfries House. “Sir Hugh Roberts, who was in charge of the Royal Collection at the time, asked Charlotte (Rostek) at Dumfries House to ring me.” It was the start of almost a decade of restoration work. This ranged from floors and banisters to whole rooms, mirrors and, of course, the renowned and extensive Chippendale collection.

“One of my favourite jobs at Dumfries House has been working on the Chippendale bookcase, which was estimated to be worth around £20 million 10 years ago. But it is these jobs that usually surprise me, as it entails doing things in a different way or because of the tools that have to be used,” smiles Hardie. The nails, for instance, were a surprise. “They have a very high carbon content and are tapered, which was unusual for the time.”

But it was the quality of Chippendale’s carving that James found the most awe-inspiring. “With the bookcase, I found a huge ‘mistake’. Chippendale had run out of veneer, so he cleverly improvised with a patch in one of the sides; it was fascinating to see and gave an insight into how he worked.”

Another notable object James worked on was the Grand Orrery in the Main Hall. A Georgian table was cut into 790 pieces and over the course of a month put together by James to create the wooden case it now sits in.

“The Grand Orrery is absolutely beautiful: I used to go to Michael Bennett-Levy’s workshop to see it being conserved. The ivory carving of Earth is just marvellous, as it has been carefully engraved with Europe and so on. But when you look at Australia, there’s only Sydney and Tasmania as the rest hadn’t been discovered then!”

Although his work at Dumfries House is complete, Hardie learned a great deal from the restorations, something he strives to do with every job. It is this and the love of the work that keeps him going. James smiles: “It’s been great fun over the years and you can’t ask for much more than that.”