The first time Barry Ansell visited Dumfries House, he had to navigate its rooms on crutches thanks to a broken leg. While not the most auspicious start to any project, the traditional upholsterer took it in his stride! Soon he and his team were working on a series of restorations for the House, providing the care and attention to detail that his company, R D Robins, has become known for. Ansell is a second-generation upholsterer, and his son Toby followed in the trade more than 12 years ago. Ansell learned his craft – springing, buttoning, stitching – at various London companies before setting up on his own at the age of 22.

That was 40 years ago, and these days Ansell employs six staff, including one who started as an apprentice more than 30 years ago. After 20 years in a workshop in Leyton, nowadays he is based in a cavernous workshop overlooking green fields outside Epping, brimming with archive materials from many of the high-profile jobs he has been contracted to do.

He likens the work to a kind of archaeology: “My favourite thing about the business is seeing the piece of furniture throughout the process. I love seeing a chair when it first comes in, then ripping it out and discovering how many times it’s been worked on before.”

Most of Ansell’s trade is through decorators and antiques dealers, with pieces often bound for stately homes and private residences. His client list includes many illustrious names, including the interior designer Colefax and Fowler, Chatsworth House and, of course, Dumfries House.

The work at Dumfries House came courtesy of renowned interior designers David Mlinaric and Piers von Westenholz, with whom he has had a long professional relationship stretching back a quarter of a century. Previous collaborative projects include work at Waddesdon Manor (owned by the Rothschild Foundation) and for the Getty family.

His first visit to Dumfries House revealed that this would be the project of a lifetime. “On my first visit to the House, I realised it hadn’t been touched for years. I’d only experienced that once before, when I went to a house that Winston Churchill had stayed in. I went into the bedroom and it was as if he’d just popped out for a cup of tea. Dumfries reminded me of that; it was like being in a time warp. To be in the running to do that kind of work is something you dream of.”

For Ansell, the thrill lay in unpicking furniture from Chippendale and Alexander Peter that hadn’t been touched by an upholsterer for years, though this wasn’t the case with every item. “The Chippendale suite had been repaired in the 1950s, but more likely by an amateur than by a professional. Luckily, they had left the canvases and webs underneath, and the original stuffing. This meant we could see all the original chalk markings where the tufts were. It was amazing to see that someone had marked out the stuffing to show where all those tufts were going to go, and then they’d put the stuffing back on. We couldn’t believe it was still there!”

In Ansell’s opinion, what lies beneath the surface of a chair or a sofa is just as crucial as what we see on the exterior. A piece of furniture’s skeletal framework, as well as the stuffing, is kept intact wherever possible. “It’s all about reinstating the original where you can,” he affirms. “Conservation is an element we always bear in mind.” 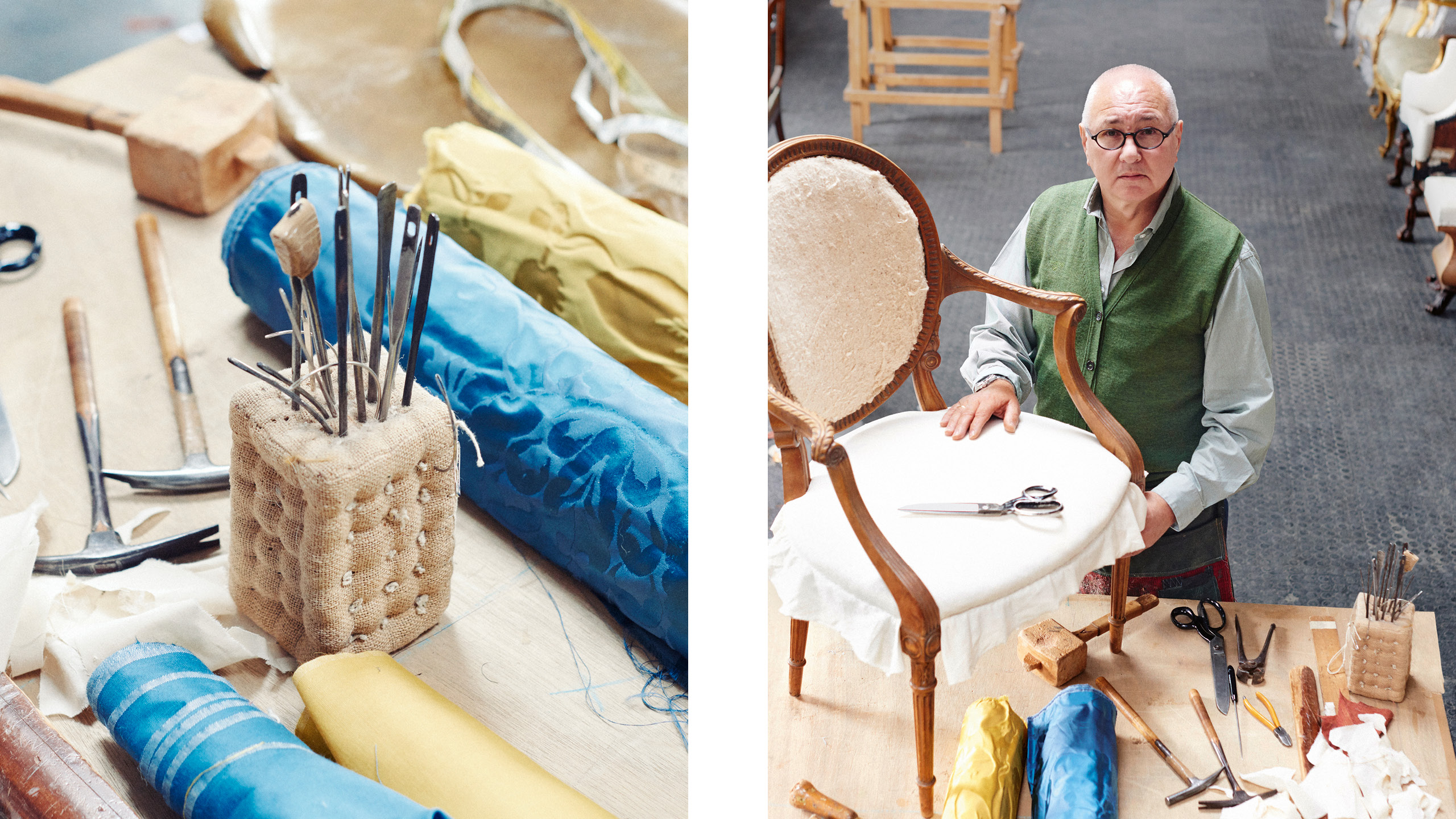 Left: Tools of the trade, Right: Barry Ansell in his workshop

Over the following months, the team worked diligently, breathing new life into the Chippendale pieces, as well as the Alexander Peter chairs and the fabric walls in the Great Steward’s Dining Room. Fabric was created by textile specialist Humphries Weaving, with close attention paid to textile archives. The result is that the furniture is now stronger and more supportive, particularly those pieces that are still being used today. Thanks to Ansell’s careful eye and hands-on approach, they are better equipped to last well into the future.

The work on Dumfries House was rewarding for Ansell, and it’s clear that he considers it a professional highlight. “I never stop learning, every job I do teaches me something new,” he says with a smile. “Take the Chippendale suite. I’ve repaired probably 5,000 Gainsborough chairs, for instance, but every one is different: some have straight fronts, some serpentine fronts, some are older than others. You just don’t stop learning. That’s what I love about this work.”