Do you know the difference between restoration and conservation? Ask most people and you’re likely to receive a puzzled look from them or they’ll tell you that they’re one and the same thing. But the words are, in fact, by no means interchangeable. Conservation means preserving an item by using the original materials and methods. Restoration means rejuvenating an item so that it looks like new. This distinction between the two is epitomised by the paintwork in the Pewter Corridor, which links Robert Weir Schultz’s late 19th century extension to Robert Adam’s original building.

When the room was originaly decorated between 1898 and 1908, the L-shaped corridor’s eight domed sections were embellished with intricate stencil designs, trompe l’oeil and gilding. But in the 1960s, Lady Eileen Bute had the corridor painted over in a kind of battleship grey. This was possibly a nod to the stark minimalism that was fashionable at the time, or perhaps a way of accentuating the charm of a pewter collection that has since been rehoused at the Marquess of Bute’s ancestral seat, Mount Stuart, on the Isle of Bute.

When the Estate was saved in 2007 by The Duke of Rothesay, the passage and what lay beneath its steely surface became a source of fascination for both staff and experts.

“Historic Scotland visited and performed a scrape test in 2009 and a small patch of the original colour palette was revealed,” explains Head Guide Alex MacDonald. “After this discovery, the Conservation School of Edinburgh came in and spent three months carefully removing the grey emulsion using scalpels and solvents. Now in one entire bay you can see the original decoration, where it has been conserved.”

“The over-painting gives us an impression of just how rich and vibrant the scheme was when it was first completed. And it lets you see what the owners saw at the time. ”

The exposed original section, coupled with a black-and-white photo showing more of the corridor’s original colour scheme, meant that a highly talented young painter called Mark Nevin from an Edinburgh family firm – then only 24 and a former gold medallist at the WorldSkills event in Canada – could work on copying the original, back along the rest of the corridor, with a team of three other painters.

“Colour-matching, accuracy and getting a sense of the background of the original work all took a lot of time and research, plus it really tested my knowledge,” says Nevin. “We also had to cut every single stencil to make precise pattern replicas according to traditional methods – you can’t walk into a shop and buy them. We had to cut them from lining paper that had been soaked for a week in boiled linseed oil.”

In the Pewter Corridor now are the results of two distinct disciplines: the uncovered original work, which is an example of conservation, while the copied section is an example of restoration. The distinction offers a greater understanding of how the rest of Dumfries House has been revitalised.

It took three months to uncover the original section and six-and-a-half weeks to finish redecorating the length of the corridor. But why was some restored and some conserved? 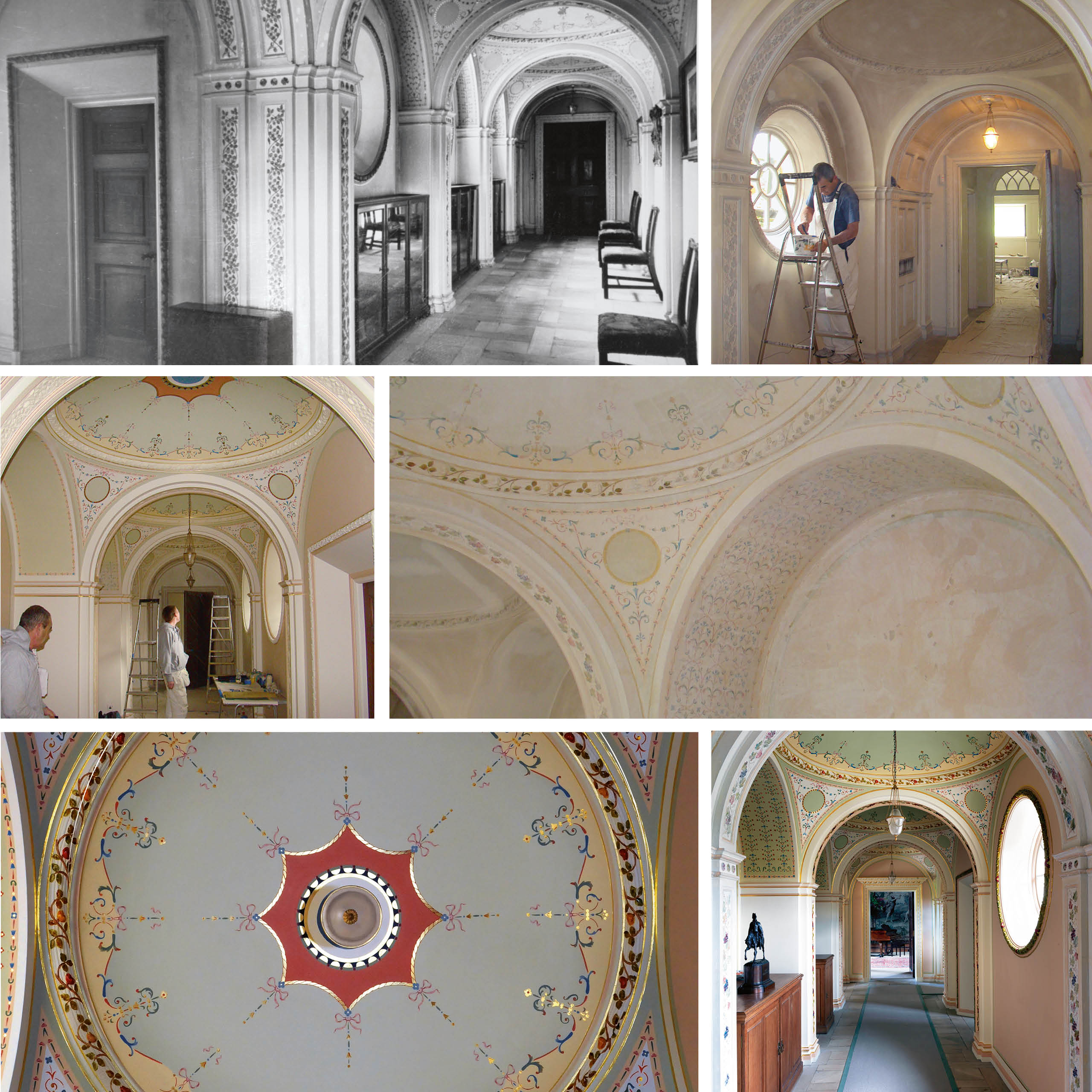 Various stages of restoration and conservation

“When we started to do the first scrape tests on different sections of the wall, we had no idea what we would find,” explains Curator Emeritus Charlotte Rostek. “The surviving black-and-white photographs from the archives showed extensive wall decoration, but whether any of it had survived underneath the 1960s makeover was anyone’s guess. But soon promising signs of colour and pattern began to emerge.  It was fabulous. Also, the work was carried out in full view of the public, which added considerable interest to the tours of the house.”

When the conservators were asked to spot-check various sections of the remaining corridor, the results were, sadly, mixed. “In some areas, small sections of the decorative scheme had survived; in others it had disappeared,” says Rostek. “It soon became clear that a complete reinstatement of the original early 20th century decorative scheme looked unlikely. There was also the question of time, with the deadline looming for the great re-opening of Dumfries House in April 2011.”

The resulting restoration-conservation exercise in the Pewter Corridor is, however, a positive, MacDonald points out. “The over-painting gives us an impression of just how rich and vibrant the scheme was when it was first completed. And it lets you see what the owners saw at the time. The bay in which the original has been uncovered, however, shows how it has aged. It’s a side-by-side comparison. Plus, by having the fresh part commissioned we’ve provided work for the artisan painters, which helps to keep valuable skills alive.”

The painters in question were rightly proud of their work and even signed it, though it just might take an eagle-eyed visitor to see where. “They showed me where they painted their initials into the scheme, in dainty off-white letters amid the husks and ribbons – but I’ve not been able to find them since,” says MacDonald.