Few people know the Walled Garden at Dumfries House better than Meg Sharp. Her grandfather was a gardener there before her, she was born and brought up on the Estate, and has witnessed both the Walled Garden’s decline and its renaissance.

“I remember the peach houses,” she says, “then after Lady Eileen [Bute] died, both the cow and sheep sheds were moved here. The garden felt so unloved; it was heartbreaking. But then Prince Charles stepped in and spearheaded the entire Estate’s rejuvenation. And look at the garden now – it’s fantastic.”

The parterres and herbaceous borders are not the only things that have been nurtured. Sharp is one of three Dumfries House gardeners being prepared for the Royal Horticultural Society’s Level 2 Certificate in Practical Horticulture, which covers everything from soil testing to plant identification. Two more gardeners are doing modules of the course that particularly interest them, and it is hoped that eventually there will be places for members of the public too.

The man responsible for bringing the RHS seal of approval to Ayrshire is Dumfries House Head Gardener Brian Corr.

Having devoted much of his professional life to education and training, and having established an RHS centre at Threave for the National Trust of Scotland, he lost no time in setting up another when he arrived at the House 18 months ago.

“There are a hundred RHS-approved centres down south,” he says, “but only two in Scotland. There’s a lack of practical skills in the industry just now and the colleges only teach theory, so we’re filling the gap in our four acres of Walled Garden – though, of course, the whole 600 acres of the Estate is for education and training. The great thing is that we’re investing in our staff and it also has the added bonus of providing me with a skilled labour force.”

Today Sharp and her fellow trainees Kris Muir and Aaron Sharp are digging trenches under the gimlet eye of Instructor-Assessor Donald Watson. You might imagine this to be a pretty straightforward activity: grab a shovel, stick it in the ground and off you go. But meeting RHS standards involves rather more than that. 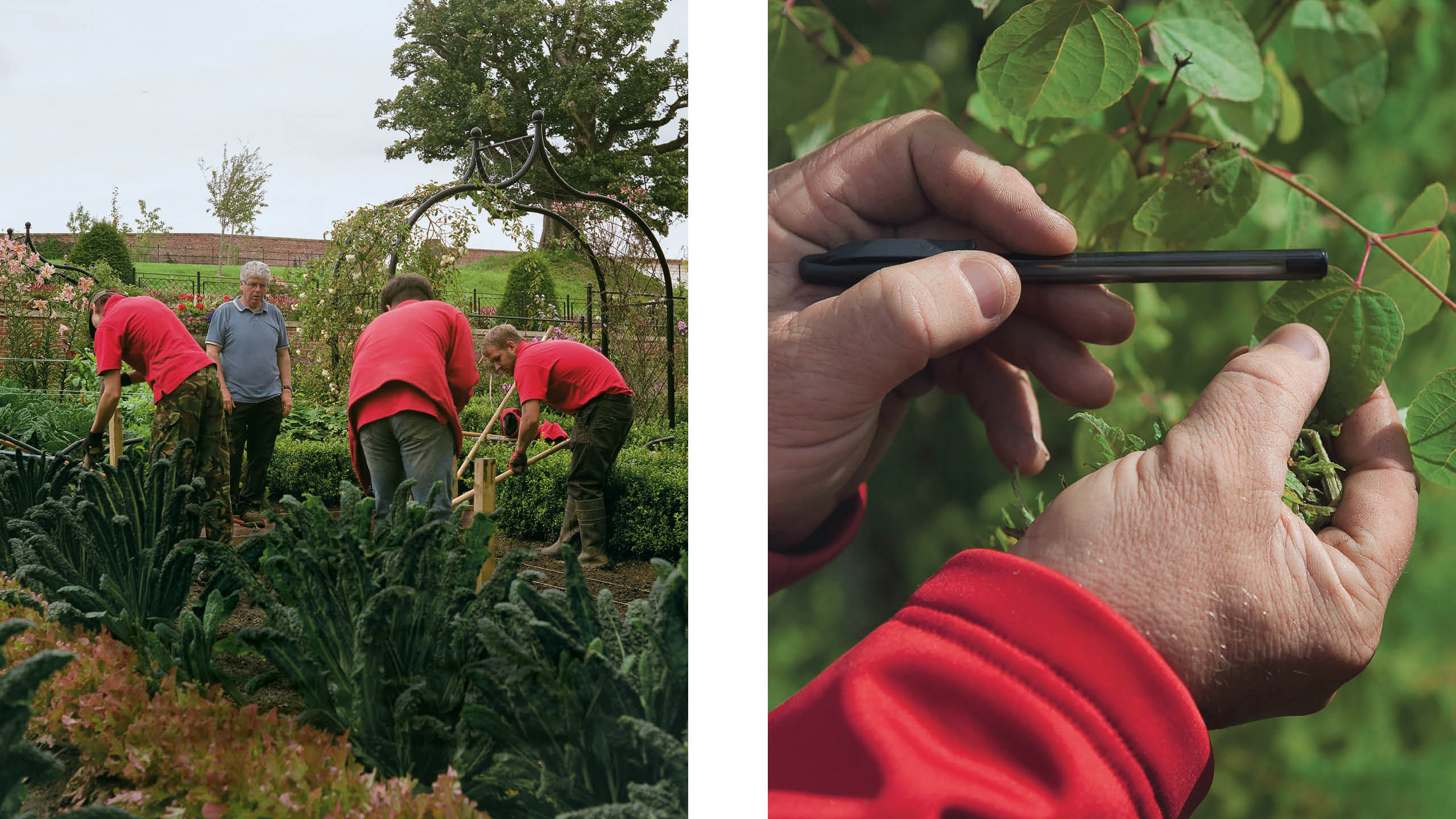 Left: It's all about teamwork with the Estate's gardeners. Right: The RHS teacher explains how to best identify plants and develop a green thumb.

First there is the correct health-and-safety way to use a spade. If you stand face on and twist your body, you’ll wreck your back. (“They’re a fairly young workforce,” says Watson, “so they might think they’ll get away with it. But it won’t be long in catching up with them.”) Instead, you need to align yourself with the trench, put the spade in vertically and bend your knees as you move it.

Then there are the measurements, which – although not quite rivalling the precision of the Hadron Collider – are surprisingly careful. The area to be dug is marked out with stakes and twine; the depth is set at 12 inches (the length of the spade’s blade). Having excavated one trench, the gardener must dig another of exactly the same width, so that the soil from it will fit into the previous trench.

Fans of The Two Ronnies may be reminded of their classic sketch about a team of yokels busily moving a hole from one end of a field to another, a few feet at a time. But there is method in the RHS’s madness: the first module in its course is about understanding the soil, and to grow a good crop involves proper digging over. “We have a heavy clay here,” says Watson, “so it’s best to cultivate it in late autumn or winter, leave it fairly rough and allow the frost to act on the moisture within it. Freezing and unfreezing will break down the soil and make it more workable.”

The course lasts 40 weeks, not including holidays, which allows the students to do everything at the appropriate time of year. They learn to take cuttings, propagate plants in the Walled Garden’s splendid greenhouses, sow and thin them, prune them, provide them with the necessary nutrition and, finally, harvest them. Reassuringly for anyone who’s had to sit through mediaeval history lessons at school, crop rotation is still very much in fashion. “Take brassicas, such as cabbages,” says Watson. “They suffer from a disease called clubroot, and if you don’t rotate them it will take hold and stunt their growth.”

Josh Niven, another of Dumfries House’s gardeners, has signed up just for the plant identification module. “Before coming here I could tell you about lemon balm and flowering currant,” he says, “but I couldn’t tell you how to identify a hellebore. What still catches me out is the sheer number of leaf types; there are an awful lot with that maple-leaf shape.” 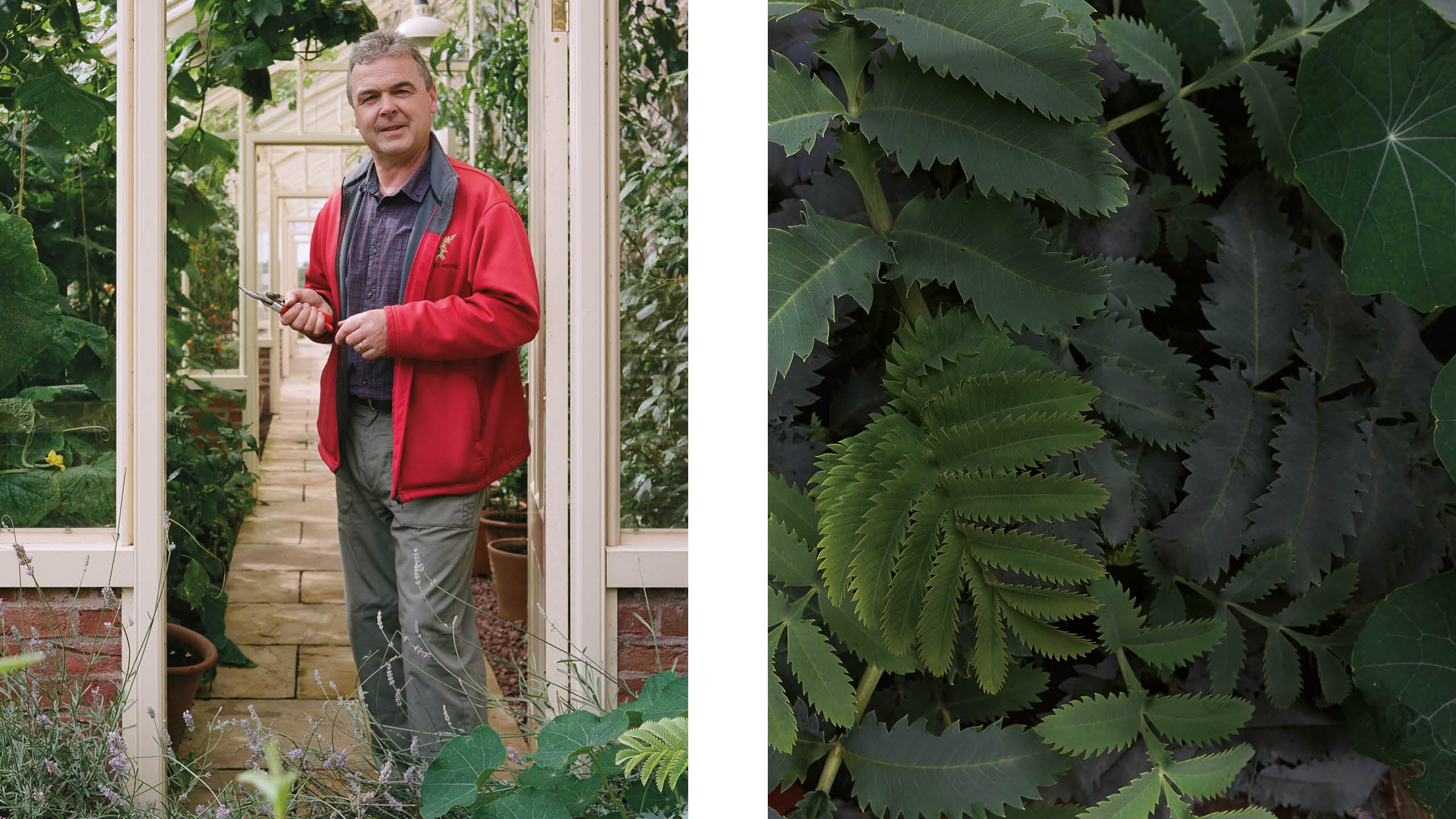 Left: Head Gardener Brian Corr is on a mission to get his team learning more about plants. Right: Green foliage.

“There’s a lot to take in,” says Aaron Crooks, whose gardening expertise was limited to mowing and strimming before he started the course. “It’s not as simple as just putting a plant in the soil.”

Crooks had been struggling to find a job he enjoyed before he came to Dumfries House via the Prince’s Trust. “I live just 20 minutes up the road in Auchinlech and I’ve always had an interest in the House, so to get a placement here was ideal. The moment I arrived I realised that this was what I wanted to do.”

“It’s amazing what we’ve learned,” agrees Muir, who has also followed the Prince’s Trust path. “It blows your mind – and this is just the beginning.”

Watson’s verdict on his students is that they have done exceptionally well so far. Next year, should they choose to, they can take a correspondence course in the theoretical side of horticulture, which will give them an RHS diploma. “They can then move on to be a Head Gardener or Leading Gardener somewhere else.”

Not that any of them seem to be in a hurry to say goodbye to the Walled Garden – least of all Meg Sharp. “It’s hard physical work,” she says, “but I’ve really enjoyed the course, and Dumfries House is a special place for me – it’s my happy place.”