Nestling beside the oak-flanked contours of Craigendarroch Hill, Ballater is a beautiful, unassuming place often referred to as ‘The Jewel of the Cairngorms’. So when, in December 2015, Storm Frank caused the River Dee to burst its banks there, devastating 600 homes and 100 businesses, the sense of collective shock in the region was palpable.

“There hadn’t been a flood like that in the Dee Valley for about 150 years,” says Aberdeenshire-born and Dumfries House trustee, Robert Lovie. “It came out of nowhere. It happened where the river takes a major turn at the village and took out half of it in just a few hours. The village is a little piece of heaven, so the whole of Aberdeenshire was in dismay at such a gorgeous part of our area being hit like that.” Once the waters receded and the extent of the damage became apparent, the community rallied. The spirited response to the flood began when The Duke of Rothesay visited the village, which is six miles to the east of Balmoral Castle, shortly after the incident. “He obviously felt a strong instinct to help out as quickly as he could,” says Lovie, who has helped oversee the subsequent community rebuild project. “And everyone at Dumfries House wanted to help and do as much as they could.” A Ballater Flood Appeal was set up and raised £160,000 in its first year. But how to channel the proceeds? “The question was ‘How do we save this place and help the community and businesses in the short term?’ The idea for a new pop-up restaurant came about eight or nine months before the floods, after a disastrous fire at Ballater Royal Station had destroyed one of the most popular eateries in the town.”

A marquee or log cabin on the village green were among initial ideas, then out of the blue a building that formerly housed the village Co-op was offered by the supermarket chain for rent of just £2 a year. “It was a blank canvas, with no fixtures or fittings, so it was perfect,” recalls Andrew Dunn of Flaxman & Co, a hospitality consultancy that helped to oversee the restaurant’s launch. “The flood damage was minimal, it was the right size and in exactly the right location.” “It was an fantastic offer,” agrees Executive Chairman Kenneth Dunsmuir. “Without the Co-op’s incredible support, the project would never have come to fruition.”

With a site secured, the pop-up idea was rethought. “It quickly became apparent that it made no sense it being a flash in the pan if it was going well,” says Dunn. “Everything was slowed down so that things could be done properly with a long-term view in mind.” So a renovation plan for a restaurant, funded by The Great Steward of Scotland’s Dumfries House Trust Outreach Programme got under way. 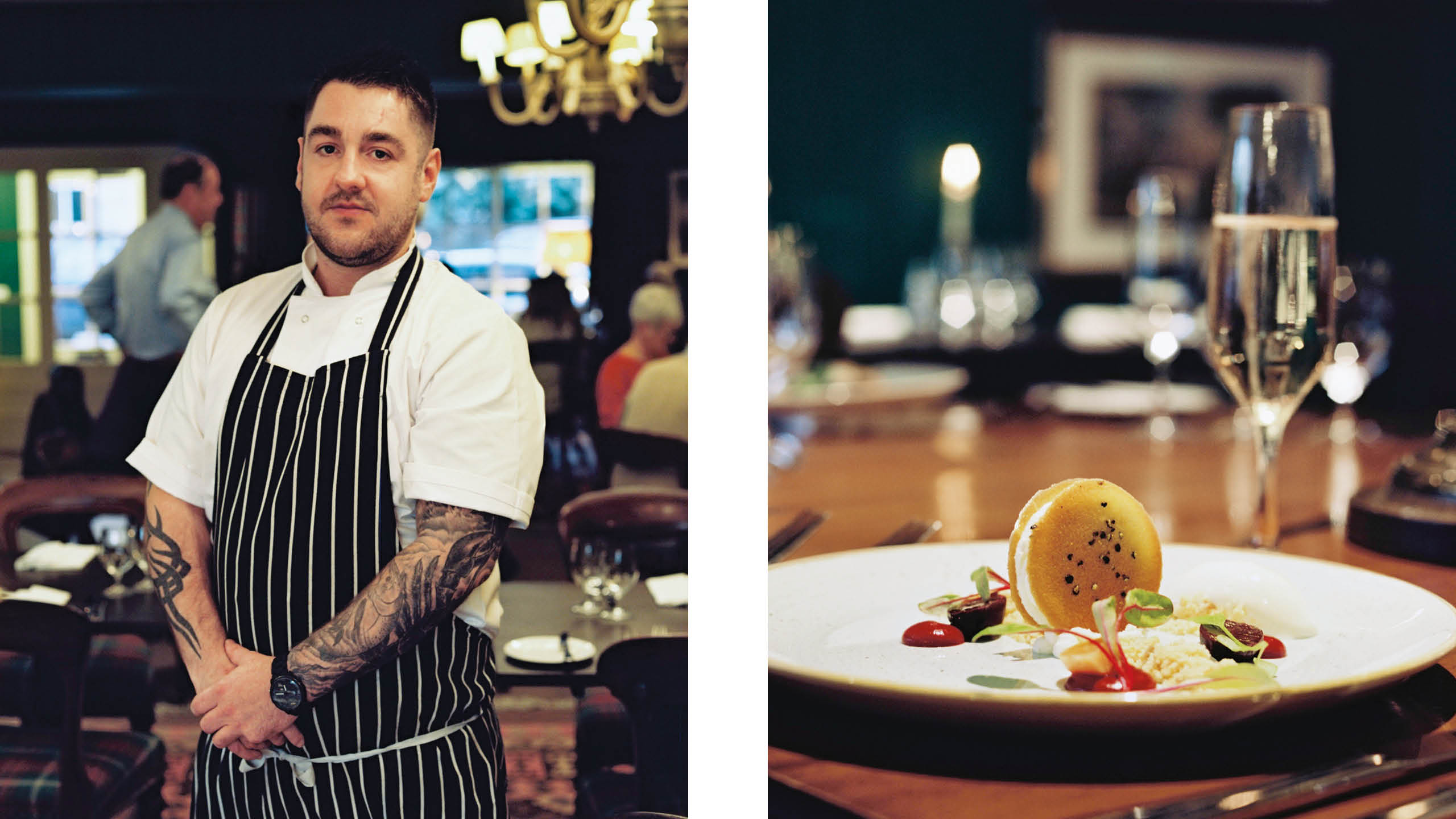 “The spirit of giving, of sheer determination, was remarkable,” says Lovie. “Owner of local architects and surveyors Halliday Fraser Munro John Halliday, a lovely guy whose house had been damaged in the flood, offered his services free of charge. We then appointed local contractor Gordon Mitchell, who pulled out all the stops and finished a 12-week build in six weeks. It’s done up beautifully inside with antique furniture and has a very Highlands feel with the Duke of Rothesay tartan on soft furnishings – the greens and reds give off a lovely warmth.”

With a 40-seat restaurant established, Savoy-trained Guy Fenton was employed as chef (“Because of the name Rothesay being given to the restaurant, the food had to be excellent quality,” says Lovie) and, in keeping with The Duke’s championing of organic products and to best support surrounding enterprise, menus consisting entirely of seasonal, local produce were drawn up; a trickier task than one might imagine.

“Small suppliers grow crops in small batches or only rear a certain amount of livestock a month,” explains Fenton. “Some suppliers update us weekly on what they have, so we have to be imaginative with what we can get and adopt a nose-to-tail approach.” Fenton adds that customers should expect “a lot of Balmoral venison and other hearty dishes” for this winter, while new chef Ross Cochrane – recently anointed North East of Scotland Chef of the Year 2017 – promises to “keep up the same standards and service, but with my own twist”.

Recruitment outside of the kitchen proved trickier – until April this year, Dunn and his operations chief Tom Crowther, doubled as managers – but two years after the flood, Rothesay Rooms is looking towards a bright future. “Our first summer has been fantastic,” says restaurant manager James Forbes. “We’re starting to see more of the same faces come in regularly, which means locals are getting more involved. People are supporting it, because the money goes back into helping the community – and the name above our door probably helps too!” 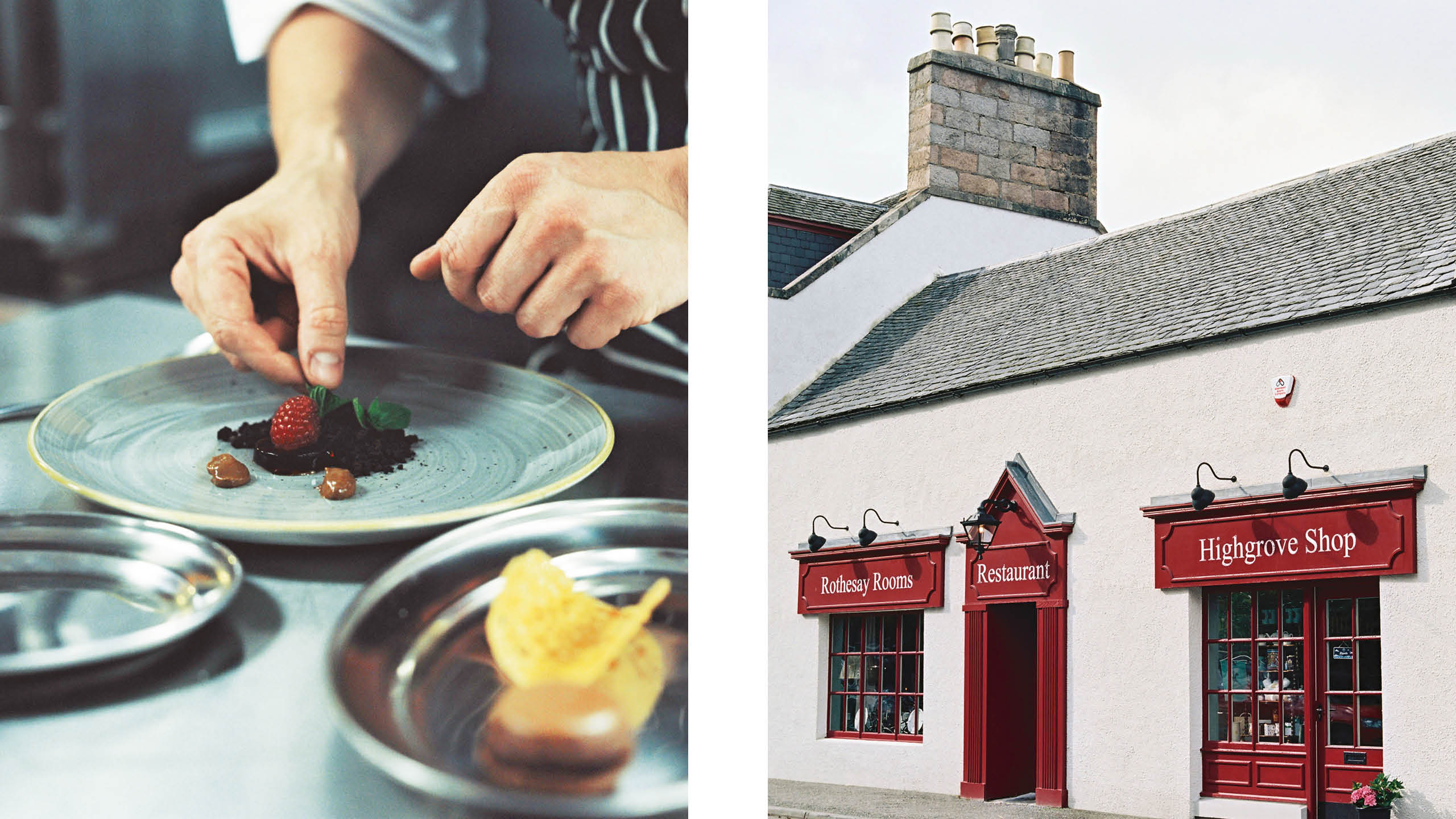 Left: an Assisette of Chocolate is prepared Right: A view of the restaurant and shop

A North East of Scotland Restaurant of the Year award is already in the bag, and there’s talk of a possible Michelin star later this year. Meanwhile, another experience awaits diners, thanks to a separate project that came into being when local butcher Barry Florence floated the idea of opening a branch of the Highgrove Shop to The Duke of Rothesay. The same can-do approach ensued, and now a range of chutneys, jams, biscuits, scarves, throws and other organic, locally produced goods are on offer in a space next to the restaurant. “Despite its modest size, the shop packs a punch,” says Nikki Dean, Store Opening Manager. “It offers an array of quality products that not only reflect the provenance of Highgrove, but also illuminate a smorgasbord of artists and small businesses. This project has served as a beacon of optimism and support for the community of Ballater and its surroundings.”

Lovie agrees, “There’s an amazing sense of pride, passion and satisfaction about the whole thing. I never visit Ballater or Deeside without someone saying, ‘Robert, thank you so much for DH getting involved – and please pass my gratitude on to His Royal Highness.’”