Symmetry, harmony and balance are three words that leap to mind when entering what would, in the 5th Earl’s era, have been guests’ first hungry glimpse of the house’s interior – these being three major tenets of the work of Andrea Palladio, the 16th century Venetian architect who was one of Robert Adam’s major influences early in his career. “The columns towards the back of the room separate the reception area from the private family rooms, which is also typical of Palladian design,” says Alex MacDonald, Head Guide at Dumfries House.

Charlotte Rostek, Curator Emeritus at Dumfries House, agrees. “With its Doric columns and stone floor, the hall is at least partly an evocation of classical antiquity. It could be seen as suggesting an atrium in an ancient Roman house, but undoubtedly it would also, paradoxically, have been seen as a modern, up-to-date statement. The ceiling, however, is rococo in style, which shows that Robert Adam was also open to the new fashions from France.”

While colour was only added to the room’s elaborate gilding around 1877 – it would have been off-white originally – the 5th Earl’s zealous adherence to the “first impressions” adage is found in abundance here. “When you enter, almost the first thing you see is the family crest,” says MacDonald. “Turn around, and you’ll see a rococo lozenge depicting an acanthus leaf and the head of a fox, and below it some hunting instruments – a reminder of his favourite pastime.”

As ever at Dumfries House, the intrigue is in the detail. 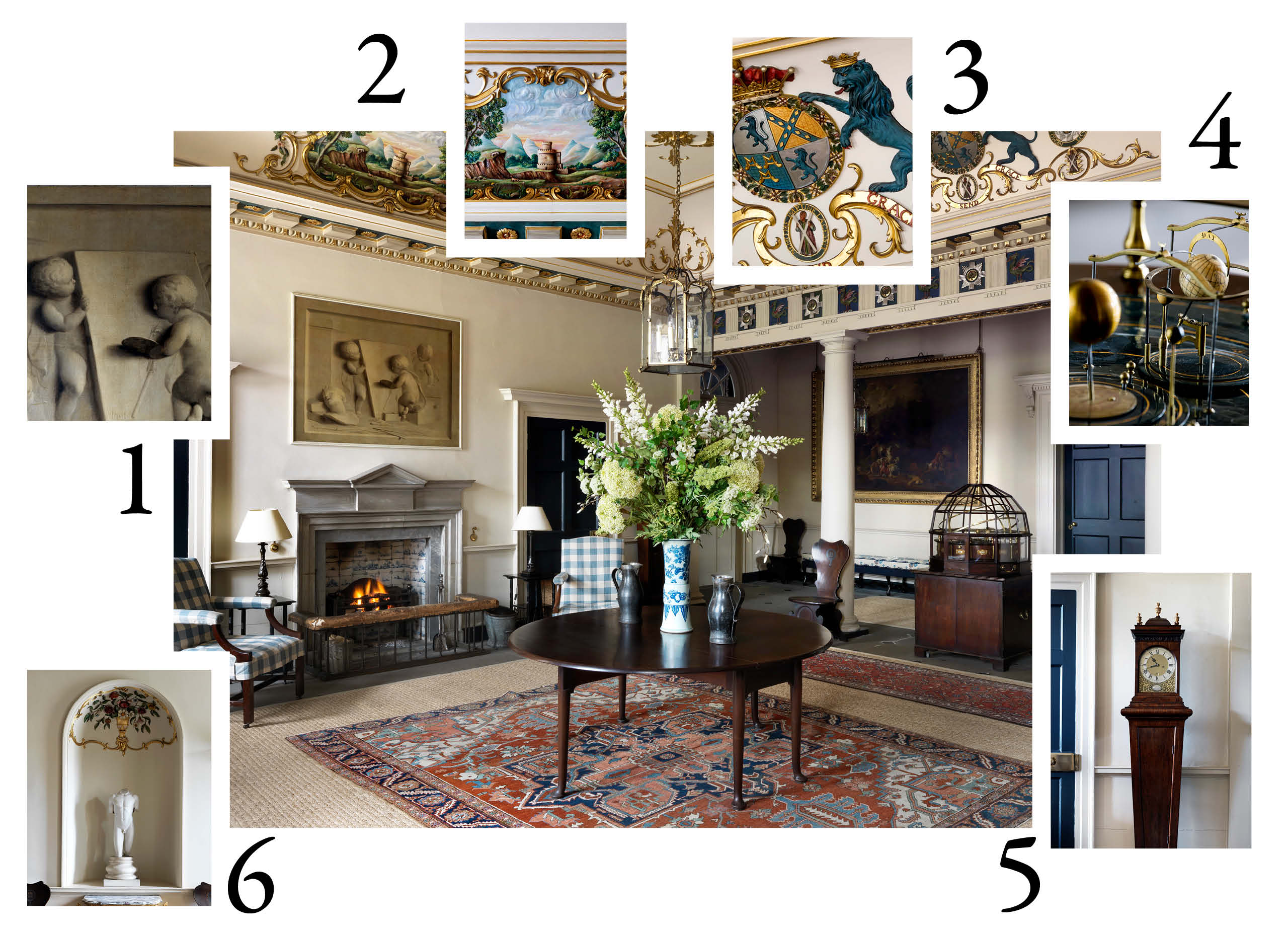 Cupid And The Arts is an 18th century panel painting by Dutch artist and interior decorator Jacob De Wit. “It’s done in a manner known as ‘grisaille’, which sees layers of grey paint built up to give the impression of 3D statuary models,” explains MacDonald.

This cartouche depicts Sanquhar Castle – an earlier seat of the Crichton family, the ruins of which can still be seen on the estate, which was sold off in the mid-17th century (restoration plans by the 3rd Marquess of Bute in the late 19th century never came to fruition).

The 5th Earl was, of course, never sheepish about his lineage and status, so it’s unsurprising that visitors entering the main reception room at Dumfries House instantly beheld the family crest, which features The Star of The Order of The Thistle and a Wyvern – another family symbol – either side of it.

The famous Grand Orrery – a mechanical, heliocentric model of the solar system – was built by Benjamin Cole of London in around 1758 and restored recently by the late Michael Bennett-Levy. In the Age of Enlightenment, this artefact made a bold statement about the owner – “Here’s a man who engages with celestial mechanics.”

This long case clock by British maker Lewis Ferron dates from around 1750. “At that time, clockmakers would often outsource the making of the case but add the mechanism themselves – Ferron had his own workshop with cabinet makers,” says MacFonald. “Not much of his output survives.”

You need to keep your eyes peeled in Dumfries House – as exemplified by this ‘buffet niche’, a concave impression in the wall depicting a decorative vase filled with flowers. “If you look closely,” says MacDonald, “there are four types of flowers springing from a single stem – a clematis, a Pierrelaye rose, an aster and what might be a canna lily. A real touch of artist’s licence.”