Dumfries House is a treasure trove of delights for art historians and enthusiasts alike. And taking a guided tour offers up the chance to view Chippendale pieces occupying much the same space now, as they did in 1760.

With so many splendid pieces, asking anyone to choose their preferred item is like asking a parent to name their favourite child. “The piece that usually gets the biggest reaction from the public is the rosewood gentleman’s bookcase, mainly because of its valuation: one expert thought it would fetch more than £20 million,” says Head guide Alex MacDonald. “It’s not a huge piece, but it’s very ornate; anyone can see it’s a work of art. Personally, I would go for the elbow chairs with their fantastic carving; look at them and Chippendale stares back at you.”

Chippendale Society’s Chairman, Adam Bowett agrees: “That suite of chairs exemplifies the elegant, serpentine line that Hogarth called ‘the line of beauty’ – it’s masterly.” But, he adds, there is also much to admire in Chippendale’s humbler designs, such as the hinged mahogany butlers’ trays: “Bear in mind that his job was to furnish the house from top to bottom and think about every detail, right down to how the mattresses were to be beaten and aired. Butlers’ trays were everyday objects without which food wouldn’t get to your table, so arguably they were more important than the bookcase.”

One piece that could never be described as humble is the splendid Blue Bed with its opulent hangings. Chippendale may most commonly be thought of as a cabinet-maker, but as textile historian Annabel Westman points out, “He was an upholsterer as well – he made frames for the chairs and sofas, but he also covered them and supplied not only upholstery for the bed but curtains for the windows, too.” 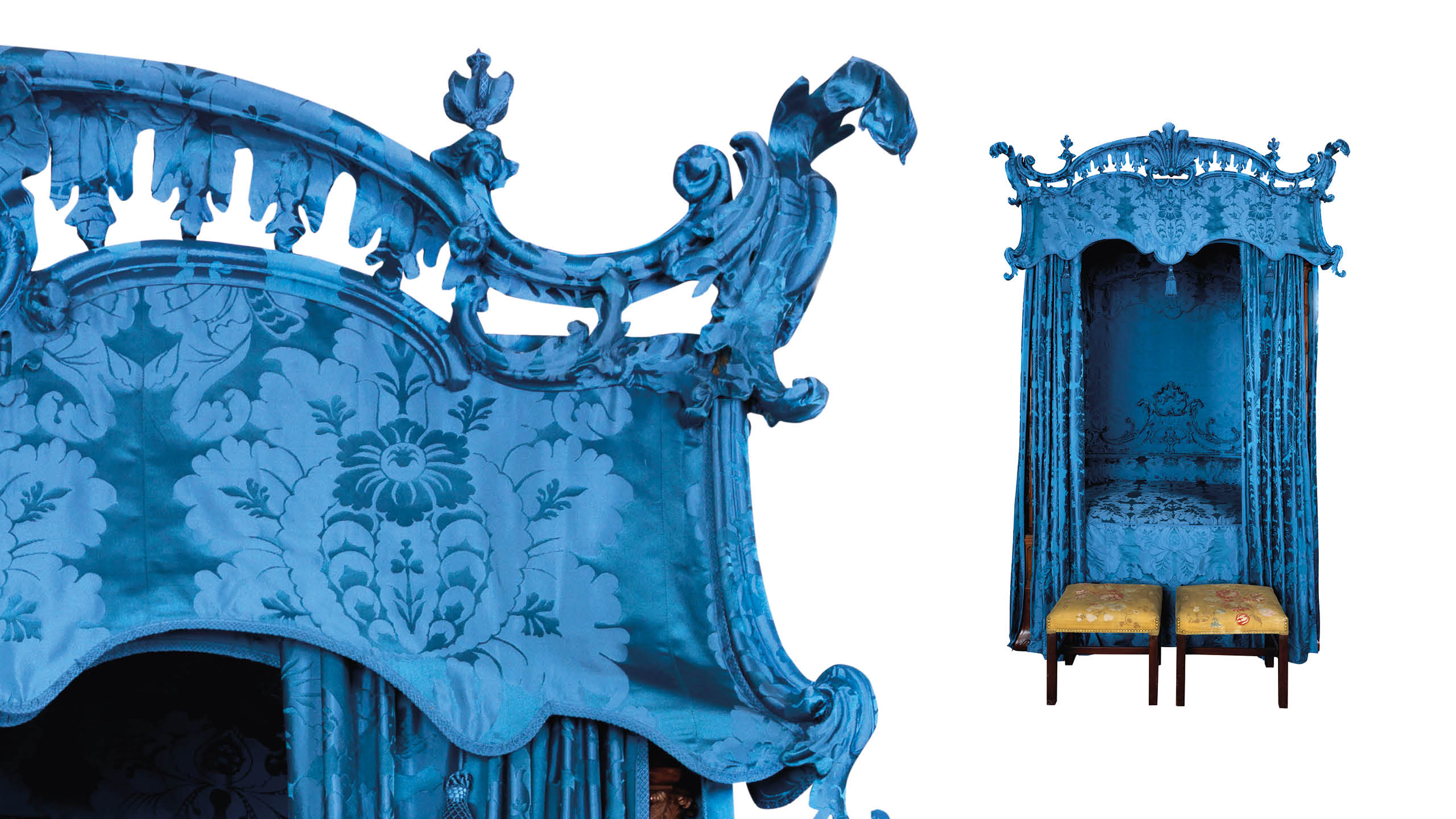 Westman oversaw the restoration of the bed with the aid of an illustration in the 1762 edition of Chippendale’s catalogue and the details in his invoice (ranging from “strong triple castors” to a “bolster fill’d wt. best season’d Dantzig feathers” (sic)). One of the biggest problems was not knowing the design of the original blue damask fabric: her solution was to copy one from a green damask chair in the house from the same period. Another challenge was putting the bed back on brass castors, which were custom-made in Birmingham.

The castors are significant because, as Dumfries House’s Curator Emeritus Charlotte Rostek explains, “The idea of fixed furniture was only beginning to emerge; instead, it would be arranged as the occasion demanded.” Therefore, pieces were designed to be wheeled around the house, and though a bed was unlikely to gather much mileage, a breakfast table might migrate on a daily basis. Mounting the restored and conserved chippendale pieces back on to castors, allowing them to migrate was historically accurate, but it did complicate matters when, with the opening of the house to the public in 2008, decisions had to be made about what furniture went where.