On a secluded industrial complex in Battersea, south London, stands the workshop of Carvers & Gilders. Replete with magnificent Rococo picture frames, 18th-century crystal chandeliers and fragments of rare wooden wall carvings, it is a dazzling foil to the grey cityscape that precedes it. “It’s a bit of a treasure trove in here,” says Christine Palmer, who co-founded the Royal Warrant-holding company in 1979. “As you can see, all of our work is niche and extremely varied,” she says gesturing to the large array of objects on display. “It can range from completing a small carving replacement to the restoration of rare stately furniture, which I find thrilling.”Palmer speaks as passionately of her craft as she does of her small but skilled team of six craftspeople.

They work tirelessly to carry out historically accurate restorations for an impressive roster of institutions and historic houses, including Hampton Court, Windsor Castle and Uppark House. “Our specialism is fine woodcarving and gilding,” says Palmer. “We’re fortunate in that we’ve built a reputation for doing the most detailed and involved work over the years, and it seems to have paid off.”

So it is no wonder the company was invited to work on the restoration of a spectacular Thomas Chippendale-designed bed for Dumfries House. The unashamedly ornate four-poster – comprising an exquisitely carved mahogany frame, three-tier mattress and wooden domed headboard with gilded adornments – dates back to 1759 and was originally commissioned by the 5th Earl of Dumfries. “It was as if the bed had jumped straight out of Chippendale’s furniture pattern book and catalogue, The Gentleman and Cabinet Maker’s Director,” says Palmer. “It is such an important piece; one of his earliest bed designs, I believe.” 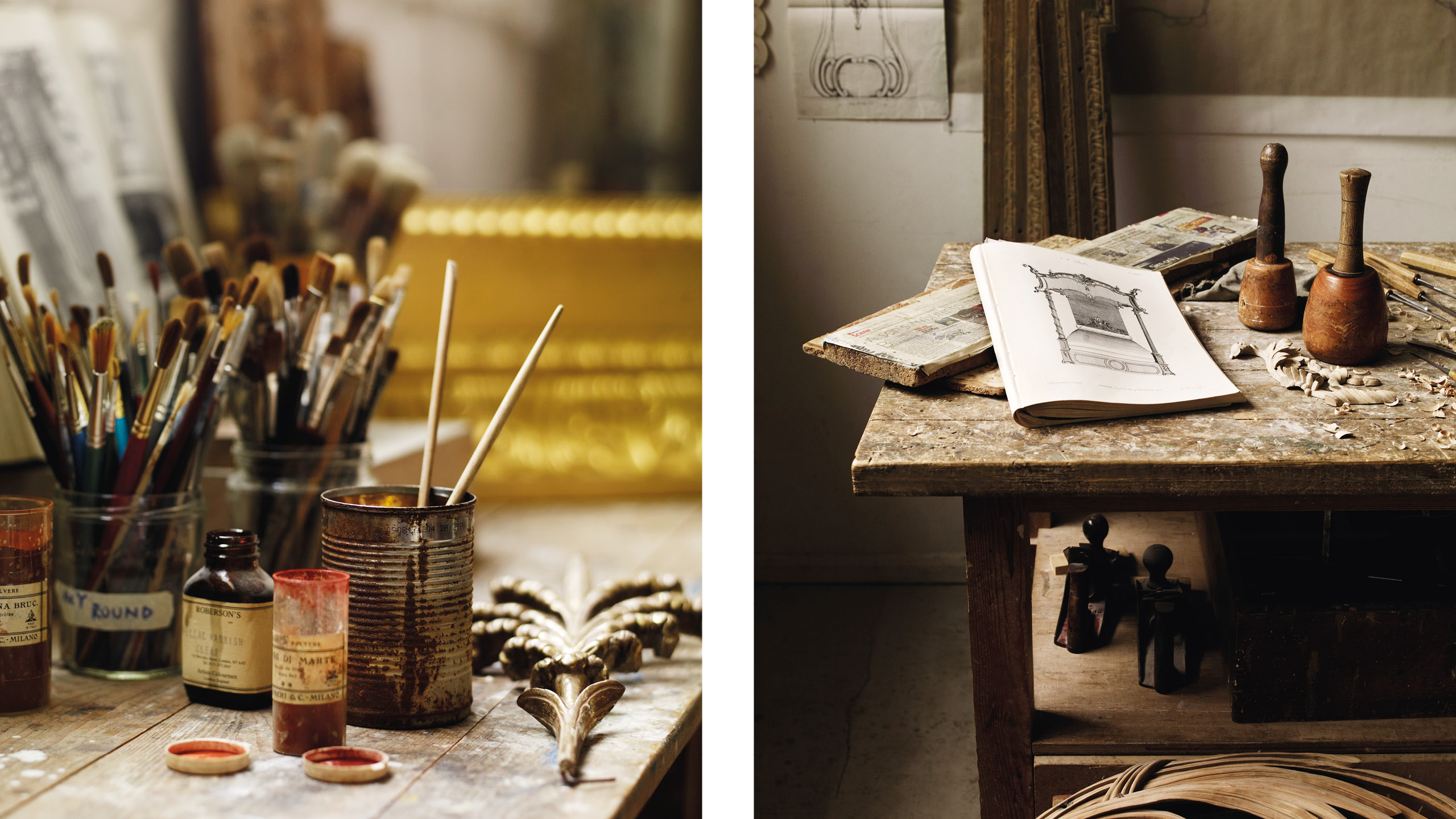 Replacement carvings are a challenge; Gilding is a company specialism

Carvers & Gilders’ mission was to bring the bed back to its former glory, which was no mean feat. In addition to structural breaks and the wear and tear of age, the piece had undergone significant design changes in 1868 by order of John Patrick Crichton-Stuart, the 3rd Marquess of Bute. “The canopy and headboard were originally covered in a fine blue damask silk,” says Palmer. “However, this was updated to a more classical-looking valance that was very bold and on-trend at the time,” she adds. “I imagine that the original silk had worn away and therefore it was replaced with paint and gilding.”

In order for Palmer and her team to start their restoration efforts, the bed had to be dismantled and transported to their London studio. “It arrived like the most glorious flatpack,” she laughs. It was only at that point that they were able to see the extent of the damage to the mahogany bed posts, bolt covers and delicate pine carvings. “There were a lot of complex repairs and intricate carving replacements that needed to be carried out,” she explains. It was a precise operation, one that required the team to work in tandem with more than 20 British artisans, including upholstering company AT Cronin and furniture maker and designer Jonathan Knight. “It was one big collaboration, which I very much enjoyed,” says Palmer. Charlotte Rostek, Curator Emeritus of Dumfries House, appointed textile historian Annabel Westman to oversee the project. “Annabel was a dream; she organised workshops for everyone, so that we could solve problems and figure out a timeline for all the various restorations.”

One of the biggest challenges the Carvers & Gilders team faced was reconstructing the breaks to the timber frame and headboard. “We had to remove layers of old glue and random screws,” she recalls. Putty was carefully applied to fill in cracks, gaps and screw holes, while the fragmented timber parts were painstakingly glued and reset. “The surfaces had to be smooth enough to take the new damask silk covering,” she says. “Even the slightest imperfection would have showed up when the fabric caught the light.” 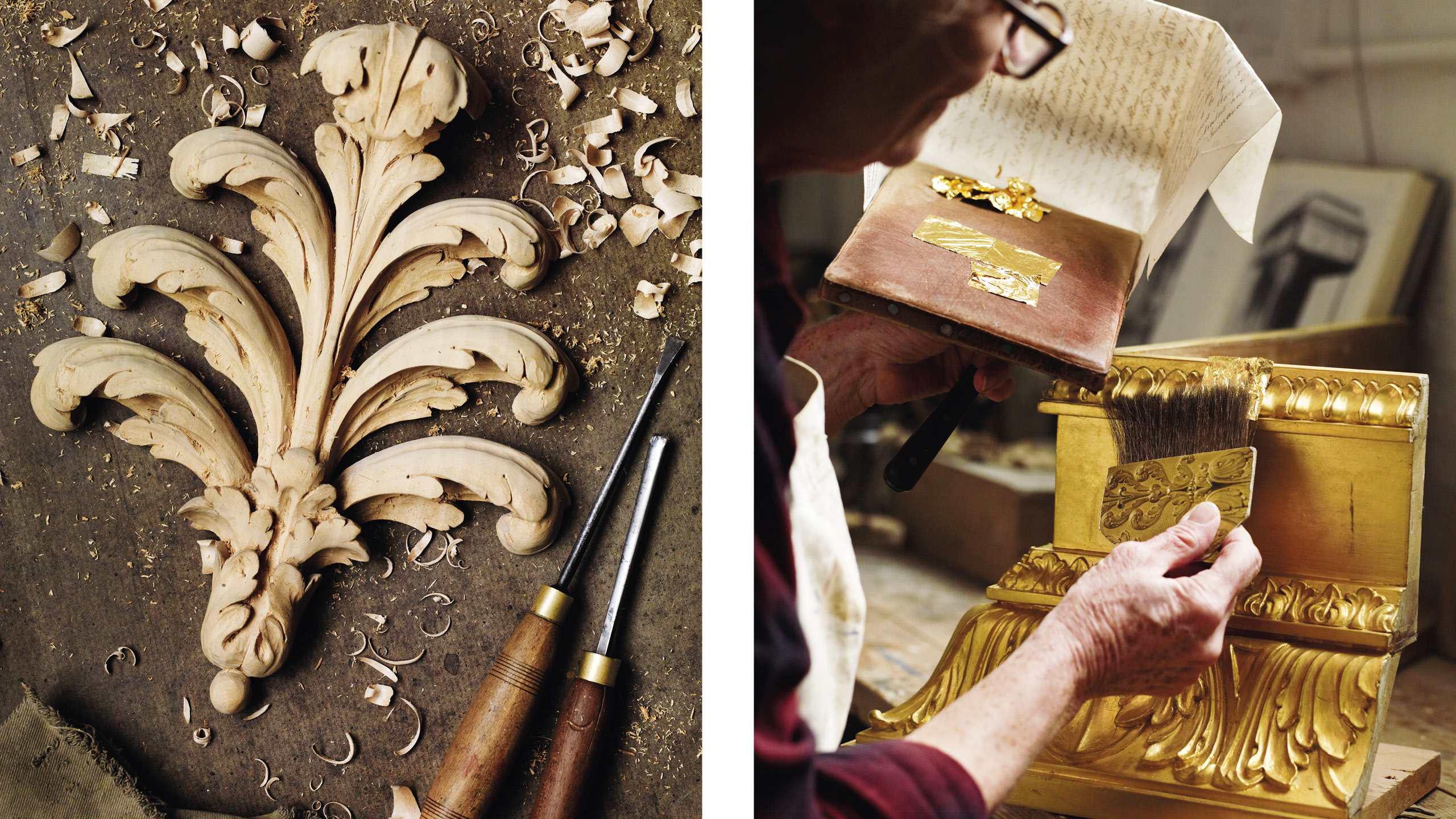 Tools of the trade; Chippendale’s book was vital in restoring the Blue Bed

Another significant part of the restoration was designing and crafting a new valance. “It had to relate to Chippendale’s original design and accommodate that incredible new blue silk covering that was going to be applied on top,” says Palmer. She spent weeks sketching out various options, before creating draft templates and finally arriving at a suitable option that subtly emphasised the bed’s flamboyant silhouette. “That was probably my favourite part of the whole project,” she enthuses.

After two years of fastidious reconstruction, the bed was carefully transported back to its rightful home, re-assembled and now takes pride of place in The Family Bedroom, alongside an Axminster carpet and a Rococo gilt over-panel. “When you see the bed, it is really quite astonishing,” she exclaims. “It is a wonderful statement piece with an equally wonderful history.”